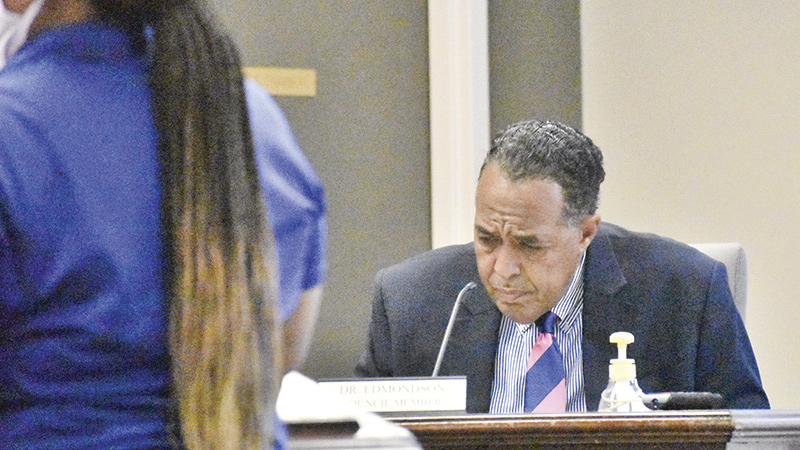 Coucilmember W.T. Edmondson writes down a citizen's concerns during the public hearing of the Peachtree/Douglas Streets one way request.

Citizens who live on Peachtree Street and Douglas Street expressed concerns about the request to one way both of the streets and expand the Thread into the surrounding neighborhood Tuesday night.

During the LaGrange City Council’s public hearing and first reading of the request, citizens’ comments varied but some shared concerns about the impact the Thread would have in the neighborhood.

The proposed portion of the Thread will extend from the current section at the Southbend Skate Park and cross at Pierce Street before making a right at Cherry Street. It will then make a left on Douglas Street and a right on Peachtree Street, according to Natalie Hale, the executive director of the Friends of the Thread. The portion would ultimately connect to the Thread portion at Mulberry Street Cemetery and will stretch three-tenths of a mile.

Hale commented at the council’s last work session that some of the residents in the area wanted the streets one-wayed in order to remedy speeding issues on Douglas Street.

“I stood on [a resident’s] porch and watched two cars go past a stop sign there,” Hale said Wednesday.

Hale said that she had received support for the one-way from both of the streets’ residents when she went door-to-door to discuss the proposal with them and left letters in the mailboxes of those she could not immediately reach.

One resident, Bobby Traylor, rents out property on Douglas Street and expressed support for the one way, but was concerned that the Thread would be too close to one of his tenants’ ramps and likely damage it.

Hale said that without making the streets a one-way the Thread would be less than seven-and-a-half-feet from the homes on the streets.

“We’re not going any closer to those houses than the existing curb,” Hale said.

Mayor Jim Thornton added that the city pays for any damage to a resident’s property during construction.

Bree also said she was against the Thread being expanded into the neighborhood, reasoning that the Thread would be more suited in a park, not through a residential neighborhood and that Douglass Street would become more narrow.

In other business at the meeting, the council took the following action:

4 Adopted the levying of the city’s Ad Valorem Tax for 2021.

4 Adopted the LaGrange Unified Development Ordinance, including a new zoning map, the re-adoption of the current Garden District text and map, and rezoning all parcels of land within the city. The adoption required the council to vote and pass to modify the city code to conform with the new UDO.

4 Discussed a petition from the Board of Planning and Zoning Appeals recommendation on a request to rezone Vernon Street at Hills & Dales Farm Road from residential to a neighborhood commercial.