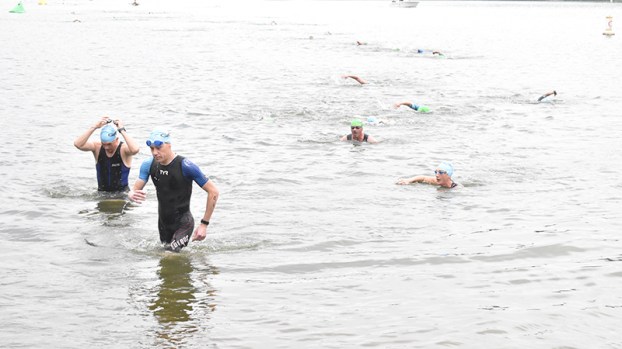 An estimated 250 participate in triathlon at West Point Lake

After missing its annual tradition due to the COVID-19 pandemic and several delays due to more COVID-19 concerns, West Point was host to the West Point Lake Spring Fling Triathlon.

“It’s great to be back out here doing stuff. This is what we do, and we love doing it, so it was great to be here,” Race Registrar Jim Rainey said.

According to Rainey, roughly 250 people showed up to take part in the event, which featured a 600-yard swim, 15-mile bike ride and a 5K run for the sprint competition and 1.5K swim, 40K bike ride and 10K run for those that participated in the Olympic competition.

The number of people was down from years past due to the date of the race.

“It’s down. We got mixed with some other races, so the competition got into us,” Rainey said. “We’ll loop it back into the spring next year, so the numbers will come back.”

Overall, the Spring Fling Triathlon was a success.

The race was a family affair, as several families took part in the Sunday race, taking several podium spots. Luke Kovak, who ran in the male 15U age group, finished with a time of 1 hour 25.05 seconds. He finished first in his age group and eighth overall in the sprint competition, while his father Mike, took second place overall in the sprint competition with a time of 1 hour, 15.04 seconds. Three different Snooks finished in the top-3 of their respective age groups, as Thoams Snook finished sixth overall and first in the men’s 30-34 group with his time of 1 hour, 22.2 seconds. Kelsey and Susan Snook each finished third in their age group finishing with times of 2 hours, 10.37 seconds and 2 hours, 14.43 seconds respectively.

There were several first-time competitors, like Alison Smith, who finished first in the Olympic age group with her time of 2 hours 38.59 seconds.

A relay group called BRAZUCAS, which was made up of people from Brazil, finished first with their time of 3 hours 31.59 seconds.

By KEVIN ECKLEBERRY Daily News On the heels of the finest season in the history of the program, the Callaway... read more