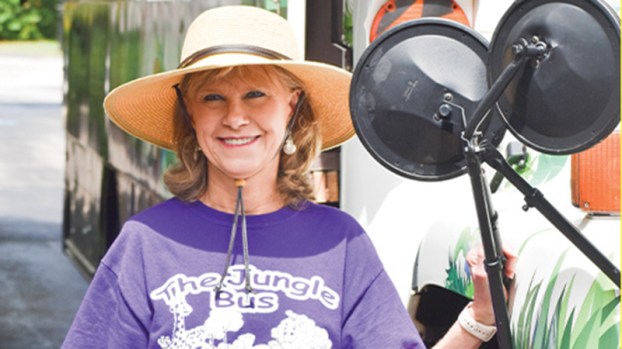 Becoming a grand marshal for the Sweet Land of Liberty Parade is not only an honor for Gail Gordon, but is perfectly in sync with the work she does with children on a daily basis.

Gordon, more affectionately known as “Reading Ranger” when she scopes the county in the Jungle Bus bookmobile with Nicole Kennedy, has an unshakeable passion for teaching the county’s youngest members the importance of reading.

“I’ve always had a passion and love for children,” Gordon said.

Gordon’s passion for reading started long before she ever stepped foot on the Jungle Bus.

As she was headed back to apply to work in the Troup County School System, she accepted an opening for the Success by 6 Coordinator’s job under United Way of West Georgia roughly four years ago.

It was through this job that she met Kennedy at a meeting, and they both brainstormed the idea for the Jungle Bus to create an accessible route for children to obtain books.

When COVID hit the area, Gordon and Kennedy had to pause their extensive operations, but still managed to continue their goals and passed out books to the community.

Gordon added that children in the area may have lost the pathway that gets them to read early due to COVID, but that it’s only made her and Kennedy work harder.

“We feel like they have missed out a lot the last year, just from not being at school and not socializing and not having that structure,” Gordon said.

“It wasn’t beneficial, but that’s part of our goal to keep encouraging reading and keep getting books out.”

She has always said that parents are their child’s first teachers, and the first years of life are critical in a child’s future success.

“I’ve personally been to headstarts, early learning centers and parent meetings and I may ask ‘how many books do you have in your home’ and it’s amazing to me when many say they have none,” Gordon said.

Jungle Jama gets books to children who need them

Nicole Kennedy, or Jungle Jama as she’s known in the community when she’s aboard the Jungle Bus bookmobile, has had... read more