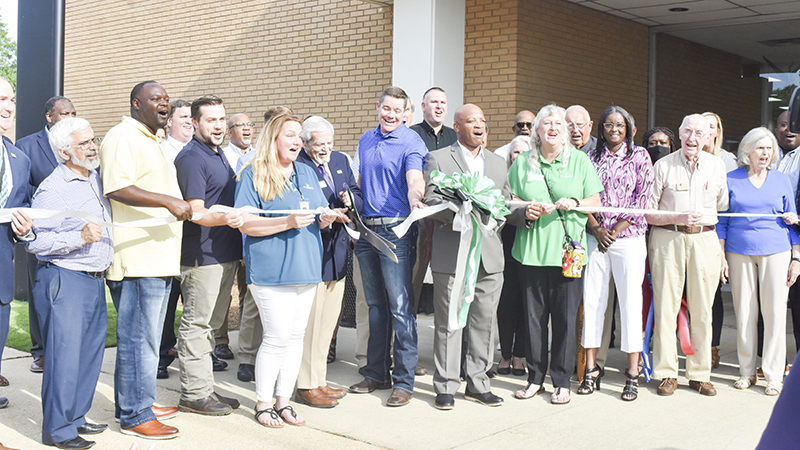 On Monday at 6 p.m., the Hogansville City Council held a dedication ceremony for Hogansville’s new city hall in what used to be the PNC bank building at 111 High St. After Hogansville Mayor Bill Stankiewicz gave a speech, everyone went outside for a ribbon-cutting.

“A project like this takes, in my opinion, three things. It takes vision, it takes commitment, and it takes effort,” said Stankiewicz, who explained that the city had considered moving city hall into a library, but it wasn’t big enough. “And then … the bank closed this building. And immediately, four or five people called me and said, “My goodness, that would make a great city hall.”

Stankiewicz recognized those who had contributed money or time to the project, including a private donor and the Hogansville Charitable Trust. He explained that the Trust, which makes money from its annual Hummingbird Festival, had agreed to help pay for the building.

“The thing that excites us is that when all is said and done, we will have acquired and repurposed this building at absolutely no cost to the taxpayer,” he said.

The new city hall opened for business on June 7, which was sooner than expected. Originally, the move from the old city hall to the new one was expected to happen closer to the end of June, according to Stankiewicz in a previous interview. He estimated that renovating the PNC building took about three months.

One of the major advantages of the new building is that it’s compliant with the Americans with Disabilities Act.

“The old city hall, the old theater was not ADA compliant. And had anybody made a complaint, we would have had to spend a small fortune on making that building ADA compliant,” Stankiewicz said during a previous interview.

He added that the new city hall has room for expansion, whereas the previous one didn’t.

“We have all these homes coming onboard in the next year or two, and we anticipate that we’re going to need more room in city hall. We have that ability; we have that room to expand in that building,” he said.