Jungle Jama gets books to children who need them 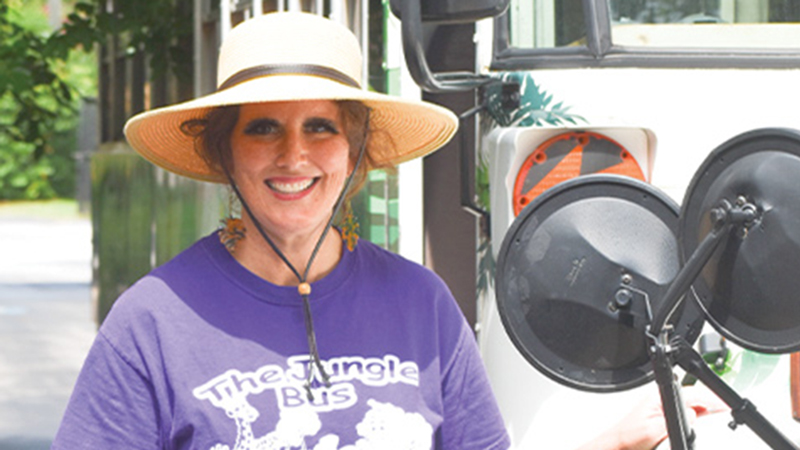 Nicole Kennedy, or Jungle Jama as she’s known in the community when she’s aboard the Jungle Bus bookmobile, has had a passion for reading her whole life. Now, she uses her persona as Jungle Jama to spread the importance of reading throughout the community.

Kennedy will share her role as grand marshal for the Sweet Land of Liberty Parade with her Jungle Bus partner and friend, Gail Gordon, a position that is not only an honor to her but fits perfectly with her role with children.

“A lot of people don’t know…to still read to their [child],” Kennedy said. “For families that don’t have the means to know the importance of early learning, we try to really be more visible.”

Kennedy currently works as the Title I Parent and Family Engagement Coordinator for the Troup County School System and has worked in the public school system for nearly 30 years as a teacher, administrator, assistant principal and central office leader.

Her role with the Jungle Bus began in 2016, after she met Gordon at a conference. The two collaborated on the idea and received support and the proper funds, plus were gifted the over 40-year-old bus-turned-bookmobile, for the project.

The two officially launched the bookmobile in 2017 and have been traveling throughout the community to give out free books and stress the importance of reading, especially to children who are still too young to attend school.

“We were seeing a lot of families that didn’t come to the school and libraries,” Kennedy said.

“We just brainstormed a way to get children ready for school, and the Jungle Bus came to be. It gave us a way to go out into neighborhoods and into community events instead of them having to come into the schools.”

Getting books into the community became even more important to the duo when the schools in Troup County had to shut down due to COVID, Kennedy said.

The two paused their Jungle Bus routine and instead set up free book giveaway tables for the community to take from.

With COVID settling in the area, the Jungle Bus duo picked back up their efforts to physically get books out to children.

“A lot of parents may have transportation barriers and can’t get out to go to the library, so we thought, let’s take the library to them,” Kennedy said. “We want all children to be exposed [to reading] and all families to be exposed.”