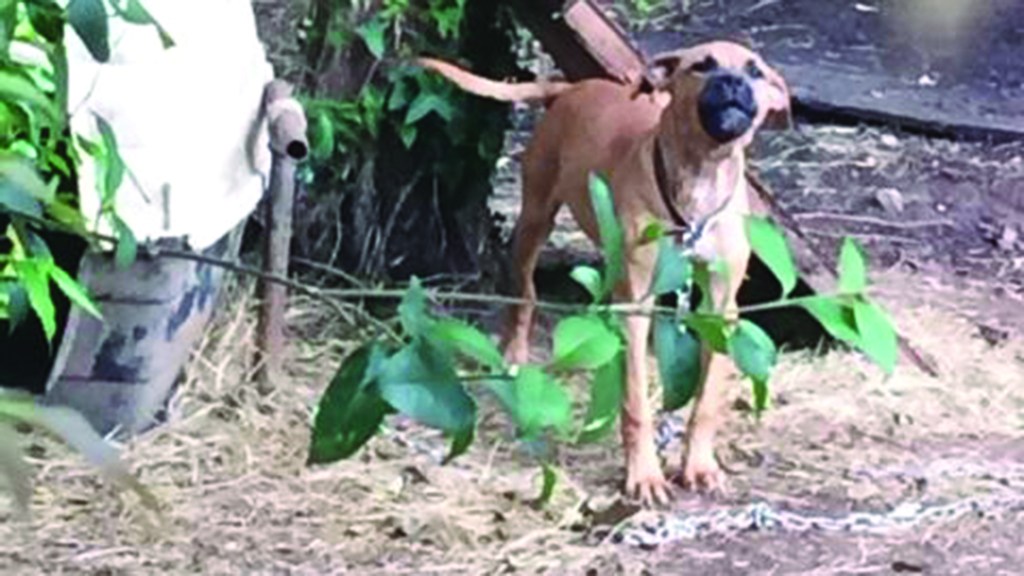 CHAINED UP: Animal activist Evie Kettler sent this image to West Point Mayor Steve Tramell in an email in March 2019.

Wanda Davis said that soon after purchasing her home in March of 2019, she heard constant dog barking from a neighbor’s yard. Allegedly, after she contacted animal control officer Willie Brooks, he said there was nothing animal control could do about it.

“A few days ago, the owner of the property next door to me informed me of the following: six puppies in an above-ground cage, the mother of the puppies tied to a line running up and down,” Davis said. “Saturday of this past week, I saw a silver tarp was covering the top of this cage, and I don’t know if you recall how hot it was Saturday.”

Jasmine Garrett was the next to speak. She said that when she first moved into her home, she noticed dogs being chained up 24/7 in her neighbor’s backyard all year long, even in hot weather and rain.

“We offered them to build a fence for free in exchange for allowing us to spay and neuter his animals. He declined,” Garrett said. “I reached out to the police, and they sent Mr. Brooks. Each time Mr. Brooks came out, he claimed that there were no dogs out there. This was very confusing to me, being that I heard them out there 24/7.”

Garrett said that after multiple attempts to bring Brooks back, she realized that as soon as he’d come, the dogs would disappear. This made Garrett suspect that the dog owners were being notified before Brooks’ arrival. She said she wasn’t the only citizen of West Point this had happened to.

“We reached out to Mayor Steve Tramell via email. He forwarded the email to the chief of police. He said he would get it straightened out. He said there were, yet again, no animals out there and that he would follow up with me,” Garrett said. “I explained to him that I am a Merchant Marine and that I was going to be away at sea for some time. I would have no ability to talk to him and asked him to reach out to Evie Kettler so she could assist him with the issue.”

According to Garrett, Kettler runs the organization that builds fences in exchange for being allowed to spay and neuter animals.

“I came back last month to see that yet again, there were dogs chained up in the yard. These are a rotation of pitbulls,” Garrett said at the meeting. “This time, I noticed there was breeding. Two dogs were chained up, and a litter of six puppies inside of what resembled a rabbit hutch. These animals cried 24/7. I had no other choice but to call 911 for animal abuse.”

Garrett said that after the police left, the dog owner, a man with multiple felonies, came onto her property and threatened her. She said her boyfriend witnessed it and called 911, after which the same police officers arrived. They allegedly said there was nothing they could do but reach out to animal control. Brooks allegedly didn’t come out.

A police sergeant allegedly told Garrett that it would take three verbal warnings for her neighbor to get a citation.

“This ordinance needs to be changed to one warning. Lord knows how many dogs endured this abuse while I was away,” she said.

Garrett said she called the police department again on the same day to have them give the dog owners a citation. Police Chief Donald Britt and Captain Kevin Carter allegedly came to her door.

“The chief of police avoided the question of why he hadn’t contacted Mrs. Evie when I was out at sea. They said they were going to have the father of the dog owners come and pick up the dog. I asked them to make sure that the dog’s welfare was kept up with,” Garrett said. “The next day, I saw that the mother was now in a trolley system (the dog mother), which is illegal, and was caught in her dog house with it flipped to the side, which has no bottom to it, and was unable to get out of the flipped doghouse.”

In one of the videos on her Facebook page, Garrett identifies the two men on her porch as Carter and Britt.

Garrett’s post says the interaction happened on Monday, June 21 at 3:16 p.m. When Garrett asked them why they hadn’t answered her question in an email as to why they didn’t contact Kettler after she asked them to, Britt said he thought “everything was worked out.” Garrett said they had told her they’d follow up with Kettler. Britt said the police hadn’t been called about the dogs since 2019, to which Garrett responded that she had been at sea.

“The initial situation in 2019, we thought it was resolved because whenever we made contact, the animals were either not in the condition that they were claimed to be in or the animals were not there at all,” said Carter. “I don’t remember what the situation was, but we can’t use that initial incident to keep harassing these people in hopes that they’re not doing what they’re supposed to do with their animals. We have to have what they call probable cause to come on private property.”

Britt said he remembered Garrett telling him that he could contact Kettler, emphasizing “could.”

“I remember she said I could contact her, but I contacted my animal control officer,” Britt said.

Britt said he didn’t know anything about the animals being absent whenever Brooks would visit the residence.

Garrett said at the meeting the police never addressed the trolley system. She said that on June 23, the dog was still in the trolley system. The puppies, she said, were crying for their mother “non-stop” while sitting in their own feces and covered in flies.

West Point ordinance Sec. 4-77 on the tethering of animals states, “It shall be unlawful to tether any animal on a chain, rope or cable. All animals shall be housed indoors or in a secure outdoor area that allows for free movement sufficient for the animal’s size.”

“I took a video of this on my property. A man came out and started yelling at me. Mia [Benefield] then yelled over the fence, ‘You are going to get it tonight!’ My neighbor, Wanda Davis, who just spoke, was doing yard work, heard the threat, and called 911,” she said.

Garrett said that after some exposure on social media, the dog was placed in a 4-by-5 chain link fence. The dog was allegedly sitting in her own feces and mud. Garrett said her house had no bottom, offering her no protection from flash floods.

West Point ordinance Item B of Sec. 4-78. on the humane care of animals states, “It shall be unlawful for any person to deprive any animal of shelter which shall protect the animal from the elements.”

Kettler also spoke at the meeting.

“Animal control is paid by taxpayers. When he doesn’t do his job, it’s wasted money. Not only is the tethering law not being enforced; the law says that you can only have four dogs,” Kettler said. “Well, these puppies are being kept away from their mother. They are no longer feeding. So are they added dogs now, because they’re not with their mother?”

When The LaGrange Daily News reached out to Brooks for comment, he declined to comment by hanging up the phone.

Tramell said he didn’t think the West Point police force might be corrupt. He doubted someone was calling the dog owners ahead of time to alert them of someone coming, hypothesizing that Garrett might have informed the dog owners that she was going to call the police, prompting them to hide the dogs.

“The bottom line is we don’t allow dogs to be tethered. We do not want dogs to be tethered in West Point. And we will do everything within our power to stop it,” he said. “Now, when we do discover it, the homeowner has 30 days to rectify that problem … you can’t have a fence built overnight.”

In an email to Tramell from March 2019, Kettler informed him that Garrett had contacted her about two dogs being illegally tethered at the residence.

In an email to The LaGrange Daily News sent on June 26, 2021, Garrett said her neighbors were putting up a privacy fence without a permit to prevent her from tracking the animal abuse on their property.