Oldest known bottle of whiskey linked to LaGrange sold for $110,000 at auction 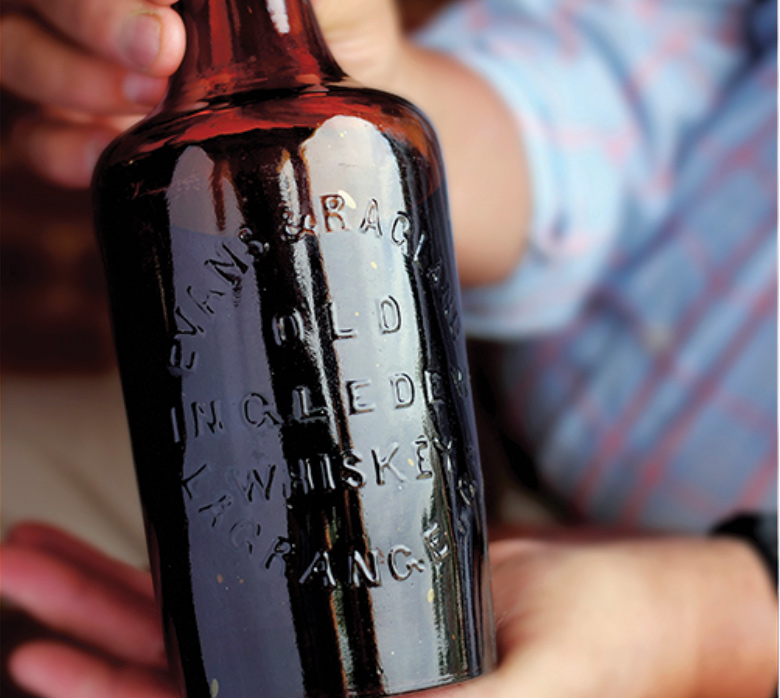 The world’s oldest known bottle of whiskey, bottled in LaGrange in the late 1800s, has continued its well-traveled journey to a new owner.

The antique bourbon bottle, estimated to be at least 250 years old, started its journey in LaGrange, judging by the engraving on its face, before being sent to Boston to be auctioned off.

The bottle was part of the Skinner Auctioneers Rare Spirits online auction. Its estimated value at the start of the auction was $20,000 to $40,000, which it surpassed by $70,000 by the time the auction concluded on June 30.

Skinner’s Rare Spirits expert, Joseph Hyman, said the auction house could not reveal the identity of the buyer due to privacy agreements, but was able to reveal that they were from the United States.

The description of the bottle on the Skinner Auction site revealed most of the bottle’s history. It was bottled by Georgia Evans & Ragland in LaGrange, around the 1860s.

The whiskey, through previously performed carbon-14 testing, is dated around 1763-1803 with a 53.1 percent probability. The bottle is consistent with manufacture 1840-1870, and blown-in-mold with an applied top. There was no size or proof stated, the description said.

The bottle was previously owned by Alexander “Rex” Woolbright, of Newberry, South Carolina, which, to his understanding, was one of three bottles of the whiskey given out as gifts at Christmas by J.P. Morgan before his great uncle received it.

Woolbright said his uncle, Logan Drake, eventually gained possession after his father’s death and learned that the other bottles were given to President Franklin Roosevelt and Vice President Harry Truman when Burns received his — all of which as Christmas presents.

After Drake’s death, Woolbright and his wife were cleaning in their home when they came across the bottle and note.

Through recent research, Hyman was also able to confirm Morgan’s ownership of the bottles.

Greg Weidman, curator of the Hampton National Historic Site in Baltimore, told him that J.P. Morgan did purchase the bulk of the whiskey in 1902, and gave him a copy of the type-written inventory sheet from 1901 that he was working off when the purchase was made, Hyman said.

“There is a notation for five gallons in bourbon from about 1860, so it confirms for sure the Morgan connection and it confirms the boast that Morgan told James Burns that the whiskey was in his father’s connection and that it was from before the Civil War,” Hyman said.

Woolbright said that no matter where the bottle goes, he’s still proud of Georgia and that those who see the bottle will know of its connection to LaGrange.

“It started in LaGrange, and the paths that it crosses with the Morgans, the Roosevelts and Vice President Truman … it all comes back to Georgia,” he said. “When we’re all gone, people are going to say ‘did you know that Georgia has the oldest bourbon body in the whole world?’ Georgia has bragging rights.”