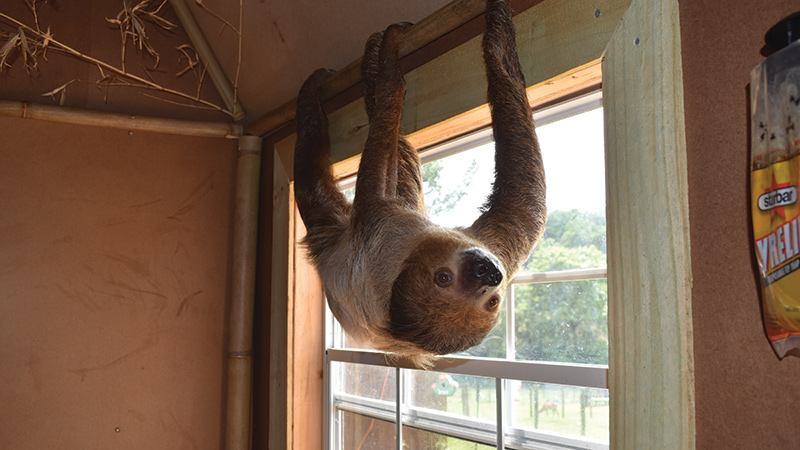 Iron P Homestead Zoo in Hogansville has been off to a good start, according to zookeeper Cody Pringle, who said it opened in May. Pringle said business has been steady on days with good weather.

“Fridays, Saturdays and Sundays seem to be our best days. Throughout the week, we stay pretty busy with birthday parties, field trips —  things like that when school was in,” he said.

Already, the relatively new zoo has about 56 different exotic species and about 15 to 18 domestic species, Pringle said.

The zoo has animals “from a bunch of African livestock to a lot of South American animals, as far as zebras, tayra, some Asian small-clawed otters, a bunch of different types of ratites, which are going to be your ostrich, cassowary, and emu.”

“We have a bunch of smaller animals, too,” he said.

Pringle said the zoo acquired some of its animals from “rescue situations” and acquired others from other zoos.

Because of regulations, the zoo is not yet licensed to have indigenous wildlife such as raccoons.

Visitors can touch animals when allowable under state regulations or federal laws.

Pringle said two goals of the zoo are conservation and education. He explained that allowing people to see animals in person may encourage them to appreciate wildlife and want to conserve them for future generations.

The zoo has what it calls its Prairie Pavilion, a place for parties and get-togethers.

“It’s a pavilion that you can rent and have full privacy there. And if you want to have your birthday party there or if it’s like a retirement party, we’ve done those,” Pringle said. “We’ve done graduation parties there, we have a wedding booked in October that will be there.”

Pringle said the zoo plans to install 100 to 200 hummingbird feeders to “amp up” the population of ruby-throated hummingbirds in the area.

“So right now, we’ve got about 20 hung throughout the zoo and have seen 50 to 55 individuals come into this area that we didn’t see last year. So, we hope to have it that when you come into the zoo and you visit Hogansville that you get a really good shot of a few hundred hummingbirds,” he said.

The zoo is by reservation only. Pringle explained that the Troup County Commission recommended this so there wouldn’t be more than 200 people at a time in the zoo.

Guests can schedule guided tours and book up-close encounters with animals, according to the zoo’s website.

Families and friends celebrate Fourth of July at Pyne…