LPD keeps cracking down on dirt bikes on roadways 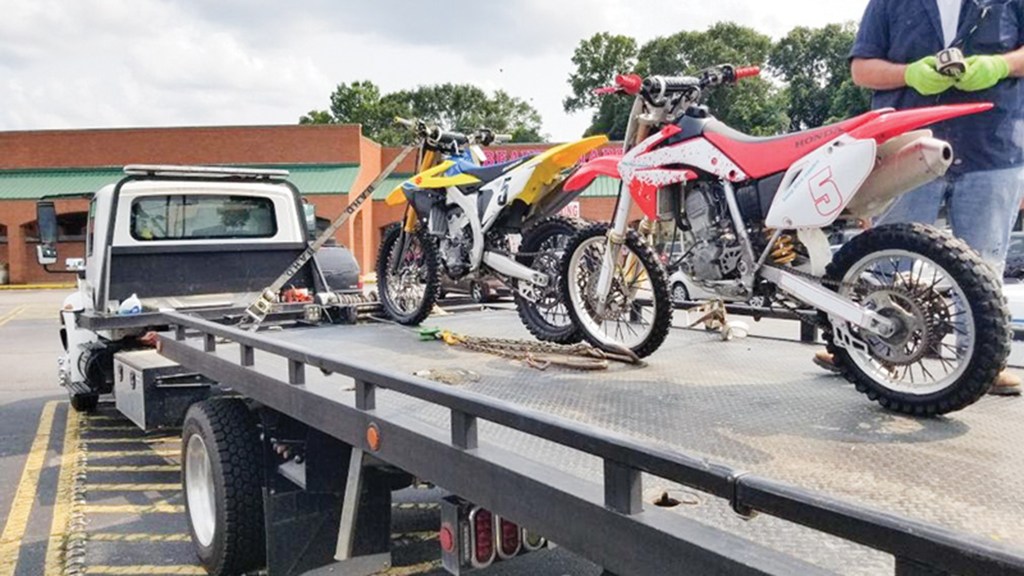 Not allowed: Off-road vehicles such as dirt bikes aren’t allowed on public roads, according to LaGrange’s municipal charter. Above: The confiscated dirt bikes

Two men have been arrested in LaGrange for a series of charges related to the improper operation of dirt bikes, according to a press release from the LaGrange Police Department.

Wendell Sanders, 35, and Lepperrious Ramsey, 21, were both charged for the operation of an off-road vehicle on the roadway, not having a license, not having a helmet, not having insurance, reckless driving, and having an expired tag, the release states.

Prior to this incident these same dirt bikes were observed driving recklessly while on Whitesville Road, the release states. The operators of the vehicles were transported to the Troup County Jail for booking on the above listed charges.

On July 3, 2021, at approximately 3 p.m., officers from LPD responded to a call at 908 Hogansville Road in reference to dirt bike activity in the roadway that was witnessed by an off-duty officer and a citizen.

The dirt bikes then entered 908 Hogansville Road shopping center and were parked adjacent to a hair cutting business. Officers then identified the operators, who were arrested. The dirt bikes were towed to a private towing service.

The city of LaGrange’s municipal charter states that the use of motorcycles, dirt bikes, E-bikes, ATVs or motorized vehicles of any kind or similar vehicles designed for off-road use are prohibited within public parks and that off-road vehicles, including dirt bikes and ATVs, are not permitted on public roads.