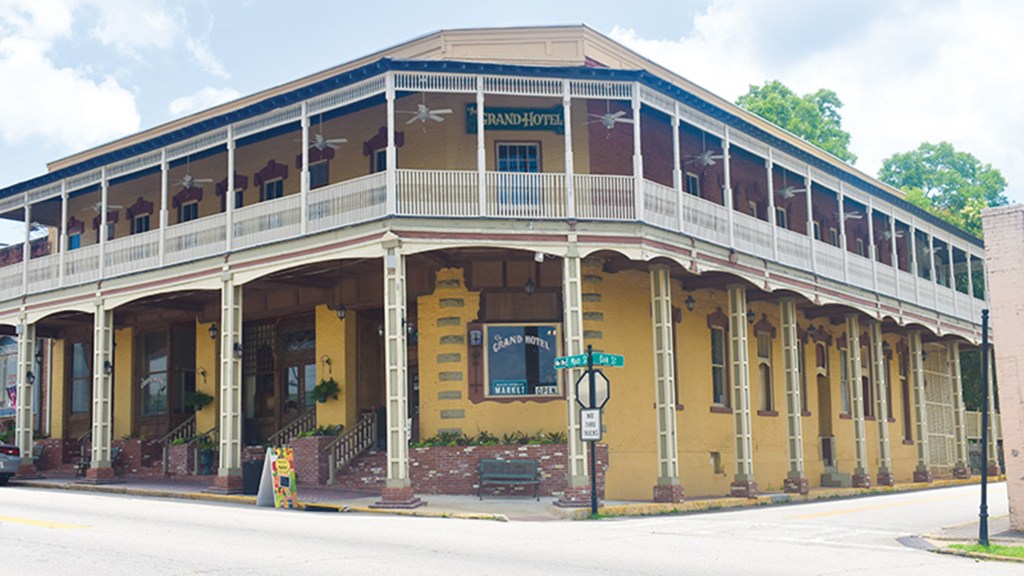 With a single signature and an exchange of a room key, Wayne and Karla Singleton were the first guests to stay at the newly reopened Grand Hotel on the corner of Main Street in Hogansville.

The hotel quietly began opening for reservations Monday as staff began adding little touches to the historic building to give incoming guests a “new experience with an old-style,” said the hotel’s new manager, Pablo Serrano.

Following decades of absolute vacancy, work to get the hotel up and running again began in November 2020, Serrano said, after the hotel was bought out by Pioneer Hogansville. Another agency attempted to reopen the hotel in 2011, but for reasons unknown to Serrano, the effort was abandoned.

The hotel’s 10 rooms, decorated in the classic charm of mixed 19th and 20th-century decorum, with hinted modernization, are now available to book, and many of the rooms have already been booked out, Serrano said.

Serrano was brought in last year to manage the hotel, which he had experience doing during his time in his home country of Argentina. He said he’s already fallen in love with not just the hotel but the community as well.

“[My wife and I] were looking for a change, somewhere quiet, and [slower] and we didn’t realize that we found that here,” he said. “The people around here are very friendly…so it’s like a family.”

Other amenities such as the downstairs and second-floor sitting rooms, the currently bare wrap-around porch and the downstairs garden patio are also open to guests, but areas such as the bar are not open just yet. However, guests will still be allowed to lounge in the area.

The upstairs wrap-around porch, which offers an expansive view of downtown Hogansville, will soon be furnished with rocking chairs and tables and the flooring will be fixed as needed. The downstairs garden as well will soon be furnished with outdoor furniture. Through the garden lies an impressive water fountain and a wooden gazebo, which Serrano hopes will be icons in future guests’ wedding photos. Guests also may visit the Main Street Market, which can be accessed outside the building or through the hotel’s lobby.

Rooms have been furnished with new, modern sheets and a paint job while the wooden floors throughout the building are polished like new. The bathrooms in each room are still in the process of being renovated to add in new showers but are otherwise functional. A lot of the furniture in the hotel was already there when Serrano began cleaning the hotel, he said, and a lot of pieces have been moved into storage.

“We wanted to make it look like it did in 1890, but because there’s not much furniture [available from that period] we used what was already available,” Serrano said.

The Singletons chose room No. 2, which allowed the couple direct access to the wrap-around porch. The cost of the room was $140 for the overnight stay.

Wayne discovered the hotel’s existence completely by accident, he said, adding that he had never been through Hogansville before.

“Twice a week, I’d go eat at Rogers BBQ, and about a week and a half ago, I was coming from Newnan, and the interstate was backed up,” Wayne said. “I got off at the Grantville exit … and it brought me here, and it was the first time I’ve ever been through this town. I was so impressed that [Karla] and I came back three or four days later, and she points at the hotel and says ‘it’s open.’”

Serrano proceeded to give the Singletons the grand tour, Wayne said, and the two instantly made plans to return to the hotel for a single night. Wayne previously worked as a government contractor and was impressed with the hotel’s architecture.

“It was instant nostalgia,” he said. “I was so impressed, and I knew right then I didn’t just want to stay here, but I wanted to be the first to stay here.”

Serrano said that all of the hotel’s amenities will be fully operational by August. The bar in particular will be open not just to guests but to the public as well, who will be able to access it from the hotel’s patio, he said. He plans to bring live piano music in the bar area in time as well.

As Serrano continues to add finishing touches on the centuries-old building, he’s calling the experience a “once in a lifetime opportunity.”

“For me, it’s amazing,” he said. “There are people who have been born here and have never seen the hotel open…for me, it’s just wonderful.”