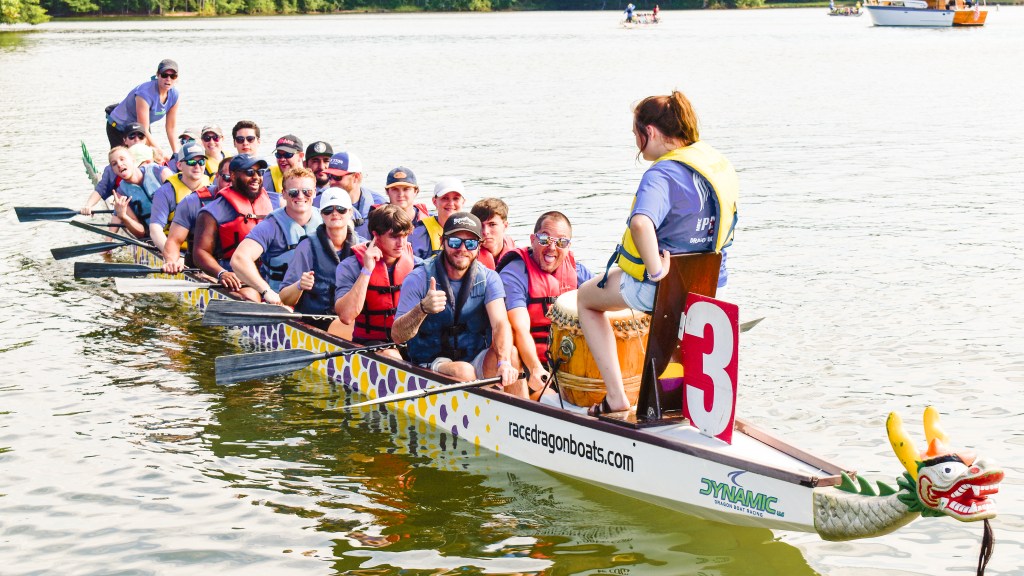 “We still have a few invoices to pay and a few donations to collect,” she said.

“Unlike the other four awards, which are voted by the community, the Dragon’s Choice award is selected by a group of anonymous judges [for] a team that exemplifies the work we do at Harmony House and in our community,” Bedingfield explained. “It is [for] a team that has energy and excitement, collaboration and positivity for themselves and for the other teams around them.”

“I think a team is made up of so much more than just what the company is,” Bedingfield said. “A team is made up of friendships and a family. And it’s camaraderie, and it’s collaboration. In order to win, you have to work together. But for some people, it’s not always just about the winning. It’s just about getting to know each other for a common cause, which is ending domestic violence.”

Cale Hosey, a paddler with Country Financial’s “Country Cats” team, said he was enjoying the exercise and nice weather at the event.

“[It’s] fun to see everybody and then compete,” he said.

Hosey said his team did a one-day practice event on Thursday.

“It’s exciting. I like to see all the people out here,” said David Patton, co-owner of Mike Patton Auto Family. “I think [considering] last year with COVID everybody is ready to get out again.”

Patton said Mike Patton Auto family sponsors the Dragon Boat Race every year because it believes in what Harmony House does for the community.

“We want to give back as much as we can to the community,” he said.

According to the race’s official website, dragon boat racing is done in a “Hong Kong-style,” 46-foot-long boat with a drummer and a team of up to 20 paddlers. The drummer sets the pace for the paddlers. Additionally, Bedingfield said that each team has a professional steerer who stands in the very back of the boat. In order to move steadily through the water, the paddlers must paddle in sync with one another.

Teams race in heats with the top 12 qualifying for the finals.

According to its website, over the last five years, Harmony House has responded to about 4,221 crisis calls, sheltered 583 residents including 258 children, and served about 545 clients through their outreach office.