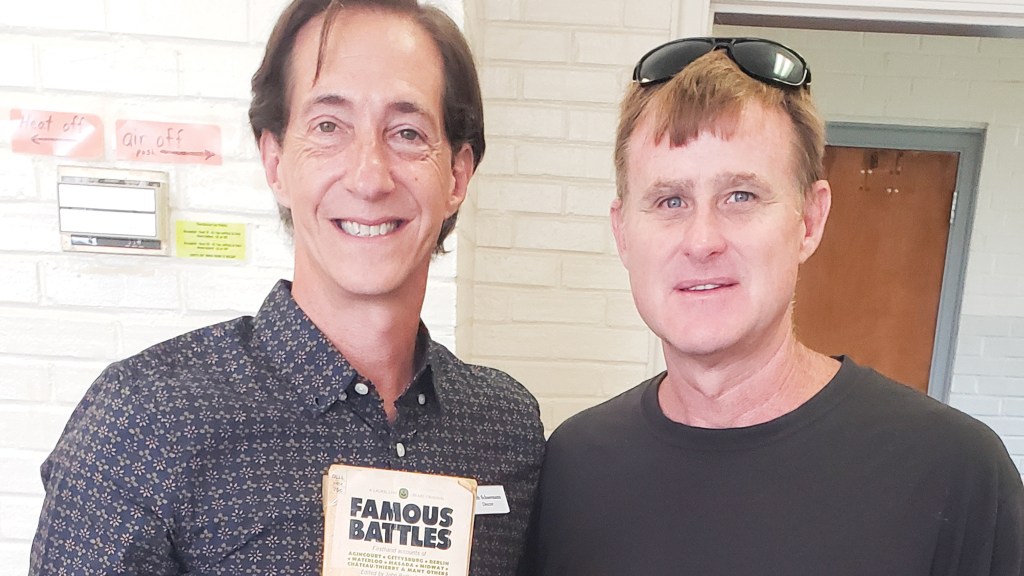 30 YEARS LATE: Kevin Littlefield (right) returned an overdue library book to the LaGrange Memorial Library after having it checked out for over 30 years ago. With him is the Troup-Harris Regional Library System Director Keith Schuermann (left).

A paperback relic was returned to the LaGrange Memorial Library on Saturday after an extended checkout.

LaGrange resident Kevin Littlefield finally returned a history book he checked out around 1985.

Littlefield was 14 years old when he checked out “Famous Battles,” and one of the reasons he declined to turn the book in was over concerns at the skyrocketing cost of library fines he’d owe.

“When you are a kid you think, ‘Oh my god, the fines are going to be huge,’ he said. “After a while, they stopped sending notices to turn it back in, so it just stayed on the shelf.”

What sparked Littlefield to finally turn in the book was when he ran into Dan Baker, a member of the Friends of the Library, who jokingly told him the fine on the book would probably be around $2,000 today, Littlefield said.

“He figured that on .20 cents a day, and back then, fines were about .03 cents a day or something like that,” he said.

Littlefield turned in the book penalty-free due to the library going fine-free in July. He was also gifted with a library card.

Though it may be a while before he ventures back into the library, Littlefield remains a major supporter of it.

“Believe me, I’m a big fan of libraries,” he said. “If a town’s going to be a good modern town, it has to have a good library.”

Schuermann said that the book will not be returned to the library’s checkout system.

“[Littlefield] said the book was in pretty rough shape when he checked it out, and I believe him,” Schuermann said, noting that the cover was being held together with tape.

“The book itself will probably be kept [on display.] With it being checked out for 36 years, there’s no longer a record of it being [in our system.]”

Copies of the book can be found on Amazon. According to the site’s description of the book, it was printed in January 1970.