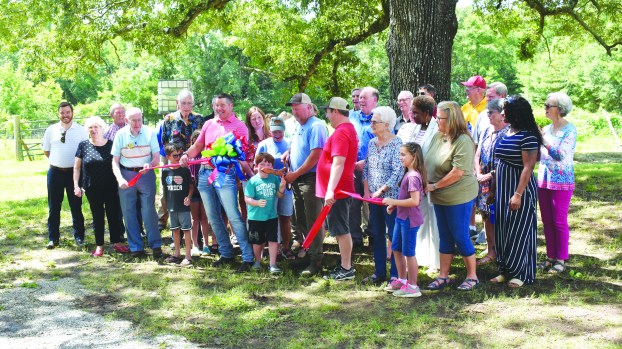 On Wednesday, Abbottsford Farms at 410 Abbottsford Road in LaGrange held a ribbon cutting to celebrate joining the LaGrange-Troup County Chamber of Commerce about six months ago, according to farm owner Philip Parmer.

Parmer said a part of his reason for not having the event sooner was so his family could display and share freshly-harvested summer crops.

Philip said he and his son, Lucas Parmer, have owned the farm’s land for three years and that this was their second year of farming on the land. Before acquiring the land, he and Lucas had dreamt of growing vegetables and selling them by subscription.

“This is just our passion,” he said.

“I’ve had people tell me, ‘You know, there’s just not any agriculture in Troup County,’ and I totally disagree with that,” Crews said. “We have four active dairies in Troup County, we’ve got them doing vegetables and all. We’ve got a sheep farmer, we’ve got cattle farmers, [and] we’ve got a lot of other things going on.” He discussed the tract of land the county had invested in on Pegasus Parkway. “We’re probably about two months away from having a ribbon cutting for our new extension office,” he said. “Hopefully that’s just the beginning of how to develop that piece of property. I can tell you all that we have a grant request in for $200,000 to build a nice pavilion. And the idea is that at some point we can have farmers’ markets and other events out there.” Crews said he hopes to see more agricultural activity in Troup County over the next several years. He congratulated Parmer’s family on the success of their farm.

“Everything you eat that we’re giving you today, we grew if it’s a vegetable,” Philip said. “Whether it’s in a dip, corn, or anything over there, we grew everything.”

He also went over what the farm grows.

Lucas said that subscriptions come with about five to eight different items each week they’re sent out.

“And you get that box of mixed vegetables 10 weeks in the summer and five weeks during the winter,” Lucas said. He explained that the farm operates on a community-supported agriculture system. “We basically receive the funds, and you get a share of that crop,” Lucas said. “That model works really well for us, and we’re actually about to be done with the summer CSA. We’re planning everything for our winter CSA in the next two weeks, and that’ll start around November.”

After Philip cut the ribbon, those at the event enjoyed food made with vegetables from the farm.