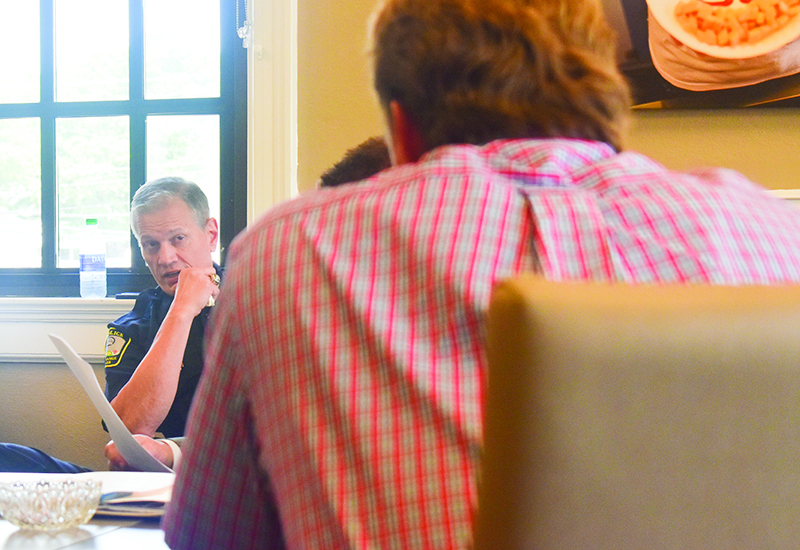 The LaGrange Police Department is continuing to search for solutions to the city’s ongoing dirt bike and ATV issues, but a true-fix to the problem may still be a long way off.

At the council’s Thursday work session, Chief Lou Dekmar with LPD presented a draft of a possible ordinance, Sec, 10-20-14, that would require off-road vehicles like dirt bikes to be registered in the city.

The ordinance reads “any resident of the city owning an off-road vehicle as defined by section 10-20-14 shall, by [specified date] or within ten days of the date of acquisition of such off-road motor vehicle, whichever is later, file with the city a complete description including make, color, serial number and name and address of the owner of such off-road motor vehicle upon form to be provided to the city for that purpose.”

The ordinance goes on to state that such registration will include a serially numbered decal that will be kept on file by the city. The city will issue a certificate of registration to the owner, and the registration shall will be required for any non-LaGrange resident who operates their off-road vehicle in the city.

Penalties listed in the proposed ordinance include a fine of $100 per violation. Unregistered off-road vehicle will be impounded and released only upon the owner of the vehicle adhering with the registration requirements.

“As it relates to enforcement, the way I suspect we would deal with [violations], not inconsistent with the way we deal with defective vehicles, is if they’re not involved in the violation when we have a call of an off-road vehicle violation … if they have not fulfilled the registration requirements, that would be handled with a notice or warning, and it would be put on record that [the vehicle] needs to registered,” Dekmar said.

As with any new ordinance, there will be a 30-day grace period for it to go into full effect, Dekmar said.

LPD has dealt with 273 calls concerning off-road vehicles over half a year, Dekmar said. Last year they dealt with 289 calls all year.

Opinions on the ordinance and whether it would be the correct solution to pursue were mixed between the meeting’s attendees, including council members themselves and members of the local branch of the NAACP.

Fredrick Manley with the Troup County branch of the NAACP suggested better education of dirt bike safety could be a suitable solution.

“This ordinance as it is is a non-starter,” Manley said. “First of all, we’re rushing into criminalizing more black youth. It’s just going to go down the slippery slope that it has no business going. I’m worried that we’re moving too fast … and I don’t want to have to keep coming to meetings stressing this.”

Dekmar clarified that 30 percent of offenders were white.

Manley also suggested a possible dirt bike location in a more rural part of LaGrange. Mayor Jim Thornton replied that this idea had been brought up to council before but received community pushback when the legality of transferring dirt bikes from their homes to the proposed area came forward.

“We’ve got to go after and pursue [violators,]” Mitchell said. “I know you have a different way on how [to pursue violators,] but at some point we have to say ‘you can’t do this and we’re going to do whatever it takes to stop you from doing this.’”

“I have a bad feeling [about] trying to impose more restrictions on somebody who hasn’t done anything wrong,” Mitchell said.

Councilmember W.T. Edmondson ultimately commended Dekmar on his efforts and said a solution to the dirt bike problem would not be immediate.

“We’ve tasked the chief with bringing us this ordinance … it’s not perfect but it’s something we’ve asked him to do,” Edmondson said. “You’re always going to have people breaking the law and there is no magic wand we can wave to correct these problems. I would suggest we let the chief continue and find some other solutions that would go along with this [ordinance]. We can’t do this overnight.”