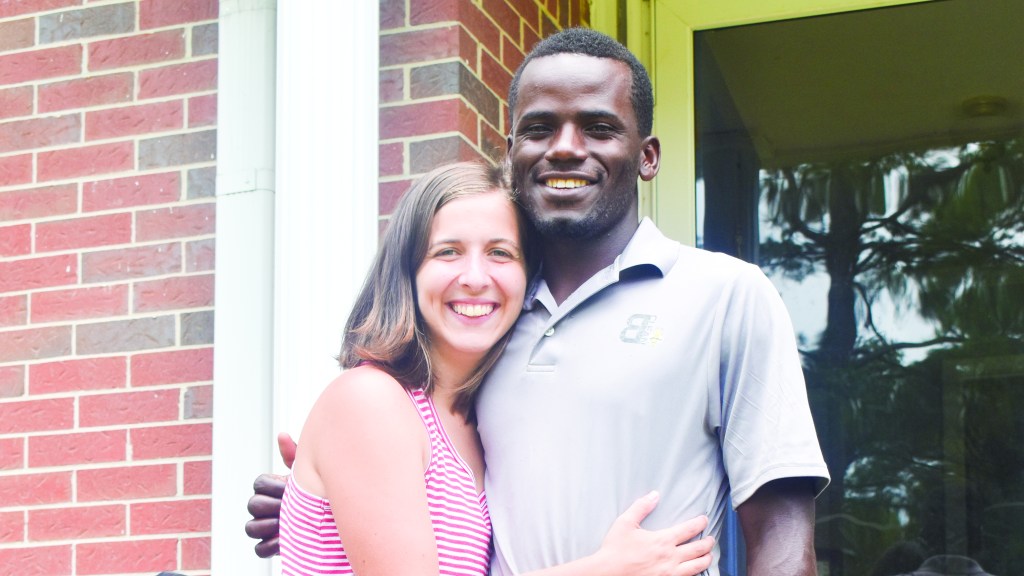 Angelina Busuulwa (right) fell in love with her husband, Timothy, through the course of prayer, good fortune, and a couple of trips to and from Uganda.

Angelina Busuulwa nee Cipolla spent much of her late childhood years staring at a picture of a young Uganda boy on her brother-in-law’s refrigerator, a boy who he was fostering overseas for years.

Over a decade later, after many “God-given” miracles, she calls them, Angelina married the man in those pictures, Timothy Busuulwa, and the two have since built a life together in LaGrange.

The Busuulwa’s story begins in the Uganda orphanage where Timothy spent his childhood. Angelina was no stranger to mission work even as a child. Throughout her life, she watched the mission work many of her siblings performed and always admired and appreciated it, she said.

“It was actually my mom who would look at Timothy’s picture and pray for him and say, ‘I wish that I could know him and learn his story and that I could be a part of his life,’” Angela said.

Ultimately, prayer works and hindsight is strange, she added jokingly.

Angelina pulled out a book of pictures she gave her husband on their wedding day. The book was filled with pictures and descriptions that map out the first days they met up until their engagement.

“This is hindsight,” Angelina said as she pointed to a picture of a younger her and her class. Toward the back was Timothy.

“I had no idea at this point about anything,” Angelina laughed. “Yet I’m so thankful for the people that captured pictures of us along the way.”

Angelina first went to Uganda in the summer of 2012 after her senior year of high school to teach English at the orphanage Timothy was still living in.

From Angelina’s end, she and Timothy did not “click” that summer. When she returned home and started college, she had no idea of the feelings Timothy had already developed for her.

“I would say I was old-style, I just wanted to get the right woman,” Timothy said. “We connected a lot … and I had things listed down of what kind of [woman] I wanted. Someone who could sing, someone who loves God, someone who could talk to other people. After I talked to her on the first day. I went to look at my list and I said ‘oh man’ … and I said to my friend [Douglas Wegulo], ‘I got my wife.’”

After the summer ended, Angelina returned to the U.S. to begin college, and Timothy held off telling Angelina his feelings for her. He would spend the next three years praying to be near Angelina, whether it was him entering the U.S. or her returning to Uganda.

“I wanted to move to Uganda,” Angelina said, still unaware at the time of Timothy’s feelings for her. “But my dad said it was best to finish my education first.”

Angelina would return to Uganda a second time with her father, John Cipolla, in tow.

Timothy was ready to reveal his feelings to her on the spot but lost his will.

On the way back to the U.S. that year, Cipolla made the comment that he was feeling “drawn” to Uganda, Angelina said, and through conversation with the family, he decided God was telling him to adopt.

It was during the third time Angelina returned to Uganda that she began to recognize her own feelings for Timothy.

“I wrote in my journal that I don’t think I’m ever going to get married because I’m never going to meet anybody like Timothy,” Angelina said. “The things I know to be true about God in my head … Timothy just [fits] and lives out his faith in a way I hadn’t seen before.”

This time, she had brought her father and her mother with her. The couple had full intention of adopting from the country, but at the last moment, their plan fell through.

“It was partially because they were older, and it’s really just hard to adopt in Uganda,” Angelina explained.

However, the Cipolla’s decided to stay in the country with Angelina and participated in the church services and activities of the orphanage. At one point, the couple was pulled aside by the orphanage father who inquired if they would be interested in sponsoring two boys in the U.S.

One of those boys ended up being Timothy.

In fall 2014, Timothy, still keeping his feelings for Angelina quiet, found out quickly it was the Cipollas who were sponsoring him.

Following the paperwork process to get Timothy into the country, Timothy’s year-long prayer of being ‘close’ to Angelina was finally heard.

“He ended up staying in my old bedroom,” Angelina laughed, noting that she was still away at college at the time.

As he got settled in his new home and became more personally acquainted with the Cipollas, the weight of the situation had finally hit him.

“This was the hardest part because here is someone who was going to be paying for me to be at school, and I love their daughter,” Timothy said. “And I was always debating how I was going to [tell them]. That was my prayer all along. If I come here, it’s going to be [the moment] that I tell her that I want to marry her.”

Cipolla instantly became a mentor to Timothy, he said, and taught him aspects such as signing up for a credit card or driving or even what kind of shoes to wear.

“I was worried that if I told him about how I felt about his daughter, then I was going to be a disappointment,” Timothy said. “If I tell him, I thought he was going to say, ‘Get your paperwork and swim back to Uganda!’”

But in Christmas 2014, Timothy and Angelina finally corresponded with their feelings for each other, and the two officially began dating, though quietly.

“That night before we went to bed, he said, ‘I love you, and I want to spend the rest of my life with you,’ and I was surprised but not too surprised,” she said. “I also said, ‘You need to talk to my parents.’”

“We went upstairs to their bedroom … we sat down, and I thought, ‘I’m dead’ … but I knew this is what I signed up for,” Timothy said. “I tell him, ‘I love your daughter and I want to spend the rest of my life with her,’ and he went silent.”

That silence was soon broken, and the two talked.

Later that day, Angelina sat down for a similar talk with her parents, followed by a talk between them, Timothy and Angelina.

“They shared with me the different prayers that they had over my life and said that they knew that [my] husband was going to be different,” Angelina said. “Then my dad starts drilling Timothy … on race, on cultural differences, on all kinds of situations.”

After the grueling conversations, the Cipollas gave the couple their blessing to date. Angelina and Timothy spent several months getting to know each other on a new, romantic level and finally broke the news to the rest of Angelina’s family.

“It was such a blessing … everybody, my nieces and nephews all loved him … the way the Lord had prepared everybody’s hearts beforehand was such a gift,” Angelina said.

In November 2015, the two became engaged. By July 2016, the two were officially married and had both a wedding in the U.S. and a Uganda-style celebration.

Today, the Busuulwas have two sons, John Ezra, 3, and Ezekiel, 1. And Timothy runs his own pressure washing business, B Clean.

The Busuulwas also started a nonprofit organization called Plentiful Harvest, which assists Ugandan individuals with starting their own businesses once they age out of the orphanage. Timothy’s long-time friend, Douglas, runs the Uganda portion of the board while Timothy runs the American board, Timothy said.

“I tell people it’s a story only the Lord can write,” Angelina said. “There were so many miracles along the way, and I think that gives me assurance in our marriage knowing that the Lord brought us together and the Lord will sustain us.”

“Never underestimate what God does,” Timothy adds. “Only God writes love stories… and he will continue writing this story until the day that I die.”