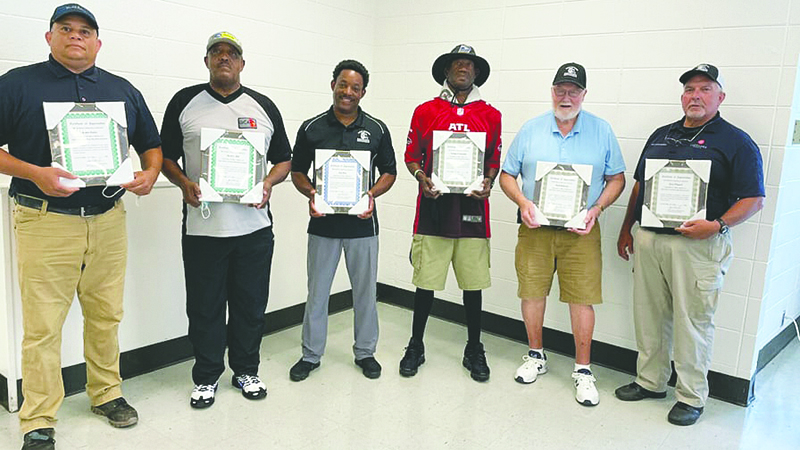 Officials with the West Georgia Football Association gathered earlier this week to celebrate several officials who have hit milestones for their years of service.

The association handles high school, middle school and recreation football in LaGrange and has called some LaGrange College games as well.

“If it’s football, we will cover it, regardless of the level,” said Richard Williams, the assigning agent.

Williams said the association badly needs new officials. They are down in numbers by about 20 from where they’d like to be.

“The most rewarding part about it is being able to stay close to the game and serve the community and kids because you play sports and be competitive without officials,” Williams said. “Once you get our age, you can’t play anymore, but you can do this as long as you can run around and walk.”

Plus, officials do get paid for their work. Williams said officials earn over $100 a night to work a high school game.

Williams said they are as far down in numbers as they have ever been right now. Williams said 12 officials took 2020 off and nine of them didn’t come back this year.

“Every official is out almost every night,” Williams said. “We are using everybody that we have.”

Williams said it’s not happening in Troup County yet, but some areas are asking schools to play on Thursdays and Saturdays because they don’t have enough officials to fill a full crew.

Williams said since Troup County can only have two home games in one night since the three public schools share the same field, which helps keep the workload down locally. However, the association covers many of the surrounding counties as well, not just Troup.

Williams said the steps to get started are to join the association, fill out an application and pass a background check.

“Once you get that done, the training starts,” Williams said.