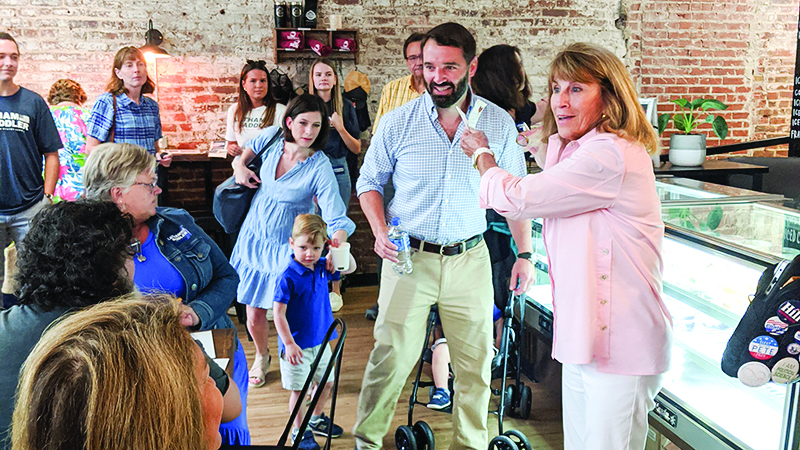 On Monday morning, Republican Senate candidate Latham Saddler’s campaign team held a meet and greet at Sweet Roast Cafe in LaGrange. Saddler is running for the United States Senate in 2022, aiming to unseat current Georgia Senator Raphael Warnock. Saddler gave a detailed account of his career and educational history, saying that he was a student at the University of Georgia when 9/11 happened. The event had such an impact on Saddler that he looked into joining the military.

“I started researching the different special operations units and decided I wanted to try and become a Navy SEAL officer,” he said. “And I had a great job lined up in New York City after college with IBM to do IT sales to all the Wall Street firms downtown. And I thought, ‘Alright, this is perfect. I’m going to get in the best shape of my life, get some life experience. Everybody says if you can make it in New York, you can make it anywhere.’”

After seeing Saddler’s resume, a retired Navy SEAL captain told him he wasn’t competitive enough to be selected.

“And I tell folks at 22, I was a pretty confident little dude,” Saddler said. “And that was like having a humble pie just smashed in my face, but it’s the best feedback I’d ever received.”

Saddler said he was inspired to spend six years making himself competitive so he could become a Navy SEAL.

He went to Georgia Tech for an international affairs degree and started learning Farsi.

He lived in Tajikistan, which borders northern Afghanistan, for an academic year.

“I lived with a local Muslim family,” he said. “I’m a Christian, and so that was a fascinating experience.”

Before coming home, Saddler said he backpacked through all of northern Afghanistan and several other countries.

He said he got selected by the Navy for SEAL training at 28.

“And what’s neat is the Navy did an unbelievable job of leveraging my background as a fluent Farsi speaker and Dari speaker. Dari’s what they speak in 51% of Afghanistan. So, I immediately deployed to Afghanistan,” he said.

Saddler was also deployed to Iraq.

Saddler said that in 2016, former President Donald Trump’s national security team selected him for his background as a SEAL and “foreign policy nerd” to be the director of intelligence programs.

“I’ll tell you we put our adversaries on their heels, and I’m proud of the work we did up there,” he said.

From briefings he received in the Situation Room, Saddler came to see China as a major threat to the U.S.

“They are hungry and focused and eager to supplant us, and we’ve got to wake up to that threat,” he said.

Saddler said he spent a year working as a White House fellow “on totally different issues.” He later held a leadership position for Synovus.

Saddler said the U.S. is faced by two existential threats: the rise of Communist China and a cultural movement in America that discourages patriotism.

“I always give these three metrics every time I speak about China,” he said. “Just this past year, they’ve passed us on The Global Fortune 500 list of companies. They’ve got 124, we have 121. Seventy percent of those are owned by the Chinese government, by the way. They just passed us as the country with the most foreign direct investment, they just passed us as Europe’s largest trading partner all last year. And now we’re seeing the Germanys of the world starting to hedge their bets that this is going to be a Chinese 21st century, not an American one.”

On U.S. soil, Saddler said there is a movement “to tear down our history, tear down our institutions, and teach our kids that it’s cool to hate America rather than love America.”

“And I just don’t think that this current pathway for the nation is sustainable,” he said. I mean, if we’re going to make this an American 21st century, we’ve got to wake up every day and earn it.”

Saddler believes that the U.S. is in dire need of good leadership.

“It’s going to be more important for the right leaders to get uncomfortable and step into this arena and put the country first and serve than it is for our youth to put on the uniform,” he said. “I honestly believe that because what good does it do to have the best military in the world if we don’t have great leaders making sure that they’re taken care of and our whole country’s taken care of?”

Saddler said initially, his young age of 38 made him self-conscious about joining the Senate race. However, he said people have told him that his age may help him inspire young citizens to love their country again.

He said that the three tenants of his campaign are security, liberty and prosperity.

Saddler believes that First Amendment rights are under threat from what he calls “woke fascism.”

He said he’s talked to many young conservatives and moderates who are afraid to share their views because people who don’t like what they say may try to ruin their businesses, lives and families through actions such as doxxing.

“I didn’t even know what doxxing was, but that’s where they post your address online to get people to show up to your house and show up to your business and harass you,” he said.

“I mean, that doesn’t stand in America.”

Saddler said he hopes his campaign will serve as a model for other leaders, inspiring them to simultaneously be authentic and serve their country.

Saddler stuck around after his speech to individually meet guests.