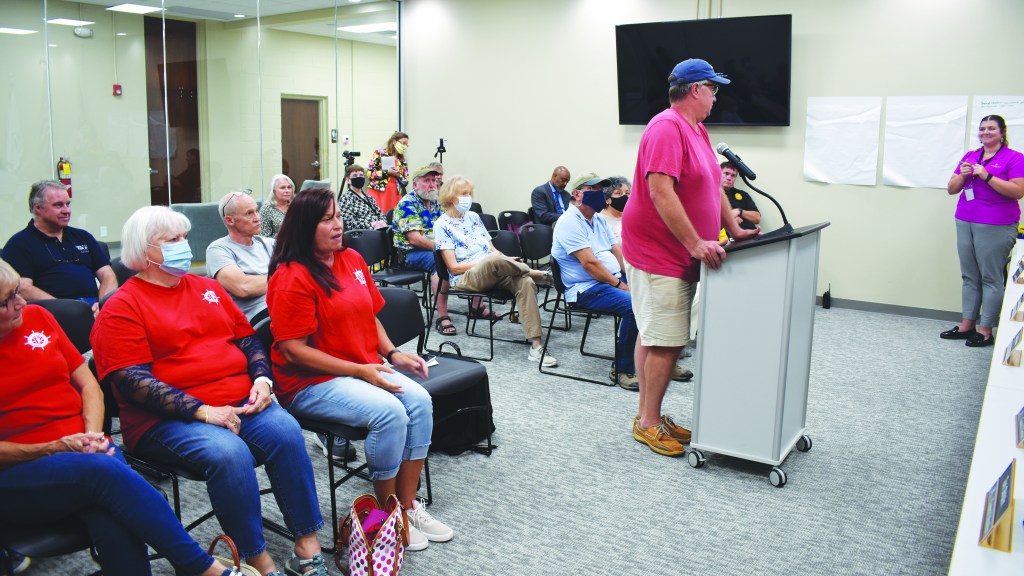 On Thursday, Hogansville Mayor Bill Stankiewicz hosted a town hall meeting at Hogansville City Hall to discuss updates on the city and hear citizen comments. Stankiewicz began the meeting by looking back on 2020, which he said was the 150th anniversary of the city.

He also went over the completion of the new city hall this year and upcoming developments in the city.

Renovations to the Royal Theatre will begin in late 2021, according to a slide shown at the meeting.

Stankiewicz said the project would cost $2 million and that Fox Theater Foundation and the Callaway Foundation had contributed a significant amount of money for it.

“Some local benefactors have contributed to the project, and the city has contributed SPLOST dollars,” he said.

Stankiewicz also discussed improvements being made to Lake Jimmy Jackson.

“We finally solved the erosion problem,” he said.

“We put in a berm … there’s pavilions and firepits and tables and fishing piers and boat ramps. We will continue with that project this year and adding other amenities to it.”

The city is in the process of creating new parks. Stankiewicz said that one of them, a park with a clock, will be created on the corner of U.S. Highway 29 and East Main Street. Additionally, he said Isaiah Lofton Park, named after a postmaster who was almost assassinated in 1897, will be finished by Oct. 31.

Later on in the meeting, council member Toni Striblin announced that public charrette on the Hogansville Amphitheater project will be held on Aug. 17 from 1 p.m. to 5 p.m. at City Hall.

During the public input portion of the meeting, several people brought up issues of speeding and sidewalks.

“My street on Collier Street is like a drag strip,” John Floyd said.

“They put a stop sign in to try to slow it down. [Drivers] ignore it. That and between the speeding and the noise from the vehicles, it’s ridiculous.”

Floyd said he could hear the radios of cars that were a quarter of a mile away.

“And it’s constant. It’s not an every now and then [thing]. It’s a daily thing. You hear cars,” he said.

Floyd said that a lot of the traffic on Collier Street comes from U.S. Highway 29.

“They come up Collier because they [don’t] want to go up Lincoln because that’s where the police department is … it’s ridiculous at times,” he said.

In response to Floyd, Stankiewicz said the city was looking into speed bumps.

“They do slow down traffic, but generally speaking, first responders hate them because it slows them down, as well,” Stankiewicz said. “We have to intentionally plan how we’re going to address those issues.”

Stankiewicz said Hogansville Police Chief Jeff Sheppard, who was present at the meeting, was aware of speeding on multiple streets in the city.

“Two weeks after we moved in [onto Collier Street], a car came over that hill, flattened our mailbox, and rolled over two times,” Chandler said. “Our next door neighbors told us that their mailbox had been flattened eight times. The things they’ve done on Collier Street have helped. We haven’t had anybody in our yard so far.”

Chandler said the residents of Collier Street would like to have a sidewalk.

Rose Pellett also brought up sidewalks, asking if the city would be installing sidewalks on Lincoln Street, where apartments are being built.

She said a lot of people walk from the apartments to the nearby Dollar Tree.

“If that would have been a new development, they would have had to put sidewalks in front of their property,” Lynn said.

Elizabeth Brummett said there was a lot of speeding on Mountville Road.

“I’m afraid somebody’s going to accidentally come into our yard and kill us … there’s a little drag strip that’s been there all my lifetime, and it starts at the second hill on Mountville Road. And they start right there.”

Brummett said she felt like a police officer should be on the road to control traffic.

Stankiewicz said he believed there were restrictions on where local police in Georgia could use radar, to which Sheppard responded that police have to be visible from 500 feet to use it.

During an interview, Sheppard clarified that there’s a hill on the road with limited visibility due to a small hill and that not all of the road is within city limits.

“We can sit and clock them, but they’re in the county,” he said.

“So, they have to come into the city. They have to have time to slow down. Where we sit is pretty far back from there. What it does is it gives them time to go through the speed limit signs, through the reduction signs, and get slowed down.”