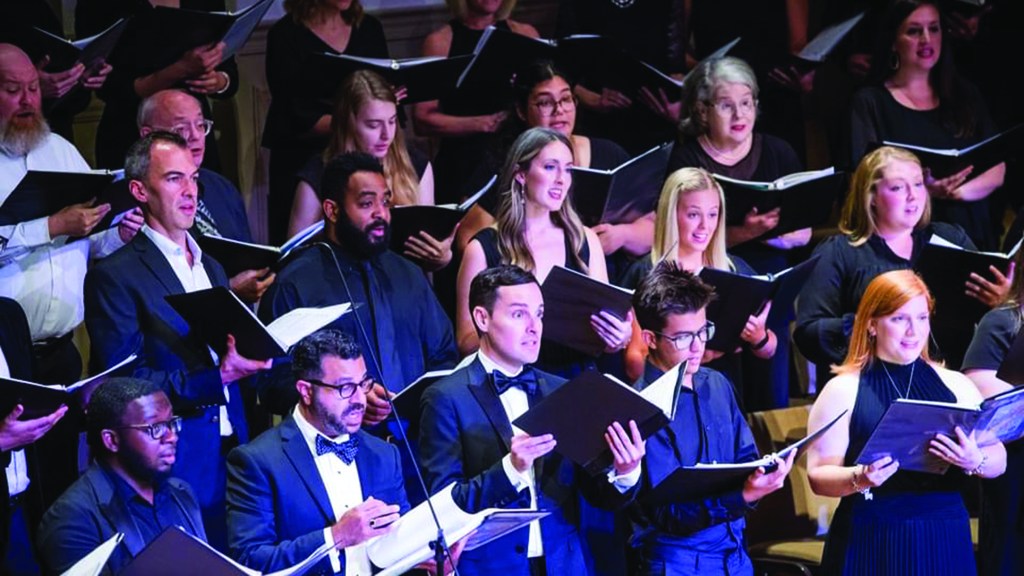 A choir sings in honor of Davis.

On Saturday, First Baptist Church On The Square at 100 Broad Street hosted a concert in memory of Marty Davis, a former music teacher at LaGrange High School. The concert was held in lieu of a funeral, as per Davis’ request, according to Stacey Hardigree, Davis’ longtime friend and colleague. Over 84 of Davis’s former students, many of them from other parts of the country, performed various genres of music including choral, opera, classical, Broadway and spiritual.

“Without a hitch, everything was beautiful,” Hardigree said. “We had probably 85 to 90 musicians there, and everybody did their part and was prepared when they got there.”

Hardigree said every song in the program had a special meaning.

“Everything about this is about her and what it meant to her or what she means to us through the songs that were selected,” Hardigree said during a previous interview.

She estimated that there were around 500 people in the audience.

While the event was free, visitors were encouraged to make donations toward the new Marty Davis Memorial Music Scholarship, which was established in Davis’ honor by the same group that arranged the concert.

Hardigree wasn’t sure how much money was made at the event. People made donations before it was held.

The scholarship is being housed at the Lafayette Society for Performing Arts, where Davis used to volunteer, according to Hardigree. She said it will probably become active next year.

Hardigree, the conductor and artistic director of the Young Singers of West Georgia, met Davis after graduating college when she started her teaching career in Troup County, according to a previous LDN article. Hardigree started teaching and was the choral director at Troup High School in 1996.

Davis was also the music director at Loyd Presbyterian Church.

According to Hardigree, what stood out about Davis was her drive, love of music, and “undying commitment to her students.”

“I think [Davis] would have been elated and completely overwhelmed by how many people loved her and cared about her and that they were influenced by her,” Hardigree said.

“She was a perfectionist, and I know that she would have been proud of the details that went into the planning of that event and of how the performers that she trained executed their performances.”

Money can be donated through lsparts.org or sent to 214 Bull Street LaGrange, GA 30240.

To donate money through the website, scroll down to “Donate” and click it. Scroll down and click the yellow “Donate” button. In the drop-down menu on the next screen, select “Marty Davis Music Scholarship Fund.”