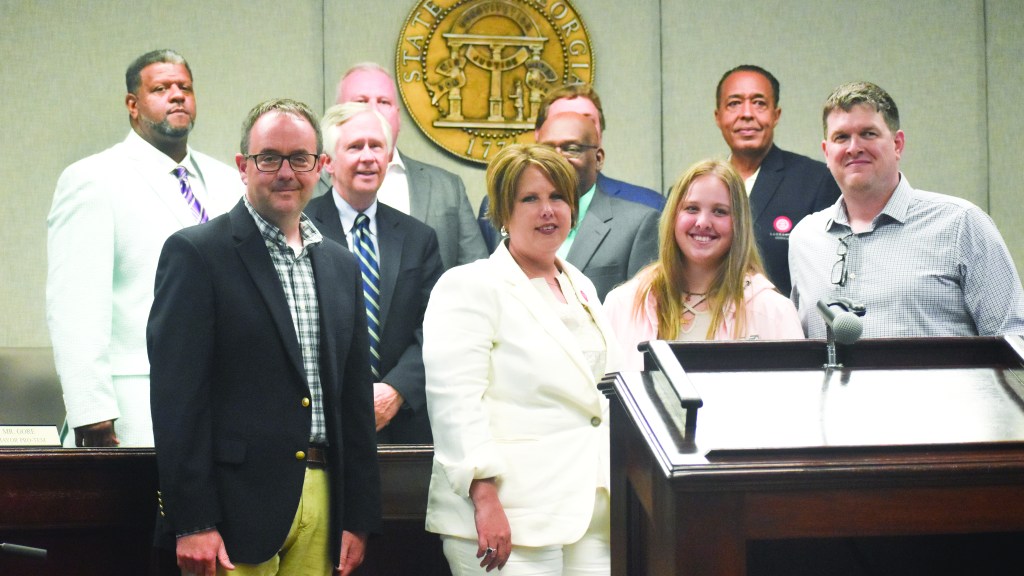 Meg Kelsey (middle) was recognized by the LaGrange City Council for 25 years worth of service to the city, five of which she has served as the city manager.

LaGrange City Manager Meg Kelsey was recognized for her 25 years of service to the city Tuesday night.

Mayor Jim Thornton sprung the recognition on Kelsey, her husband and her daughter during the city council’s evening meeting. Kelsey has served the city in several capacities since she returned to LaGrange from graduate school in 1996.

“[July] is also her five-year anniversary as serving as our city manager,” Thornton said.

Kelsey started off as the city’s development specialist before eventually becoming the assistant city manager and then the deputy city manager.

She’s also worked in finance, planning and development and human resources for the city.

Council members complimented Kelsey on her work, recognizing not only her role in a high-profile position but also that she was a woman in a position that has traditionally been held by men.

“Not only did you fill Tom Hall’s shoes, you put on your own stilettos,” Councilmember LeGree McCamey said. “We thank you from the bottom of our hearts for your service and your dedication.”

In other business at the meeting, the council held a public hearing to receive comments on a Board of Planning and Zoning Appeals recommendation to rezone property located adjacent to Vernon Street and  Hills & Dales Farm Road as well as held the first reading for the rezoning.

The property, which was voted to be rezoned from R-1 (Residential) to C-1 (Neighborhood Commercial) will be used for a planned senior living facility.

Two residents stepped forward to express concern on the project’s effects on the surrounding area, including traffic and storm water runoff issues.

The owner of 1350 LaFayette Parkway, Mark Roland, has requested sewer access in order to set up a food truck court behind the business.

Meanwhile, Brian Stone, the owner of 1360 LaFayette Parkway, is also requesting sewer access as a business showroom is currently under construction on the property.

The Council held the first reading to modify the speed limit on a portion of Greenville Street.

Through communication with the Georgia Department of Transportation, one solution was to remove the crosswalk in the area, turning it into an “applied crosswalk”, city planner Mark Kostial said. DOT also suggested that a stop sign on the road be removed, allowing drivers to drive further south and lessening the effects of the wall’s visibility issues, Kostial said.

The council held the second hearing to adopt renewable energy tariff No. 1. At the July 15 council meeting, the council signed a resolution that allows the city to sell solar credits to Walmart as part of an agreement with MEAG Power.

The council additionally authorized an agreement with the Troup County Board of Commissioners regarding the LaGrange-Callaway Airport.

TCSS students under 18 can have free breakfast and…