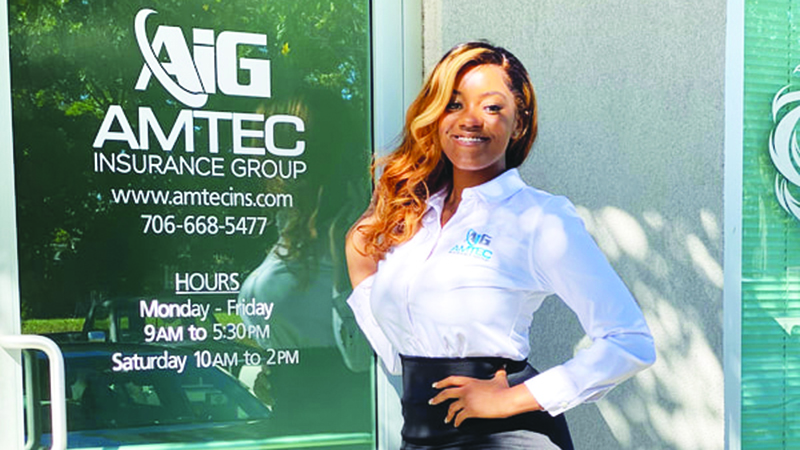 A tragic event threatened to change a young LaGrange woman’s life forever, but it didn’t stop her from achieving success. At 23-years -old, shooting survivor Dezirea Skye owns Amtec Insurance Group, according to a press release from the City of LaGrange Housing Authority. LHA emphasized that Skye is a former resident of Benjamin Harvey Hill Apartments, which are now called The Phoenix.

At age 18, Skye had just graduated from LaGrange High School. Not knowing that her family had planned a surprise party for her, she went to another one.

“During that time in LaGrange, gang violence was really, really bad,” Skye said.

Skye had just arrived when violence erupted at the party.

She jumped into her friend’s car. A stray bullet went through her shoulder and hit her face, breaking her jaw in two places.

“Where I was was a one-way, so there was only one way in and one way out,” she said. “So, we [were stuck] in traffic. And I didn’t know it until afterwards [that] the car was shattered… it was everywhere. I was in a hatchback, [and] the back window was shot in. And so, I lifted my head up for a second, and then the bullet — it felt like it punched me in my face.”

Skye said it’s probably a good thing she lifted her head because otherwise, the bullet may have hit one of her friends’ heads in the front of the car.

While it was a stroke of bad luck that Skye got shot, she had almost been even worse off. A doctor told her the bullet was two inches from a main artery in the side of her throat.

“All my friends were screaming. And the crazy part was I was so calm. I was like, ‘Ya’ll, call my mom and my dad.’”

Skye said she didn’t understand how bad her injuries were until she got to a hospital. Skye recalls being visited by former LaGrange High Principal Dr. Penny Johnson after she woke up in the hospital. Her teacher, Alexis Williams, had teachers at the school sign Skye’s yearbook.

It took two surgeries to repair her jaw, and in order for it to heal, Skye had to have her mouth wired shut for months.

She hated having to eat through a straw at that time. Even after that, she had to get braces because the wiring shifted her teeth.

“[My mom] had to be around me a lot every day, all day to make sure I wouldn’t choke on my food because if I choked on my food, they’d have to cut the wires out so I could breathe,” she said.

Skye said that when her mother had to go to work, her grandmother would watch over her.

Traumatized by the shooting, Skye considered becoming a recluse for the rest of her life. She spent much of her time with her grandparents because they made her feel safe. Depression took its toll.

Fortunately, leaving LaGrange helped, and Skye was able to attend college. She moved to Auburn, Ala. to attend Southern Union State Community College before transferring to Kennesaw State University her sophomore year.

For a while, Skye wasn’t able to pursue her dream of owning a business because she was stuck inside herself and self-conscious of being a shooting victim. She said it made her angry and defensive when people would bring up her being shot.

She said that talking about her experience and learning to trust God helped her heal. She credited her grandmother for all of her help.

“She really showed me the face of God, and she really was the one who pulled me out of my depression,” Skye said. “She always told me, ‘Skye, you have to believe in yourself and trust in God.’”

One day, Skye decided it was time to pursue her dream of owning her own company. She said she was inspired to start her own business by her parents, who were entrepreneurs.

“They tried to open up a store,” she said. “My dad had a car wash. And then my mom was always a smart woman. She always wanted me to have my own thing.”

For several years, Skye worked as a receptionist for an insurance agency. While there, she started studying for an exam to obtain her license to sell insurance. Shortly after, she passed her exam and started Amtec Insurance Group, which sells auto, home, renters, life, health and other types of insurance

“We’re a one-stop shop, so you can get your health insurance and your car insurance all in one place,” she said.

Chad Cooper, director of the development and marketing for the LaGrange Housing Authority, said people can learn a lot from Skye’s story.

“This was a beautiful story that not only residents of Housing Authorities needed to hear, but the world,” Cooper said. “To overcome such an experience at such a young age is amazing. Sometimes it takes people decades to even began the process of healing.”