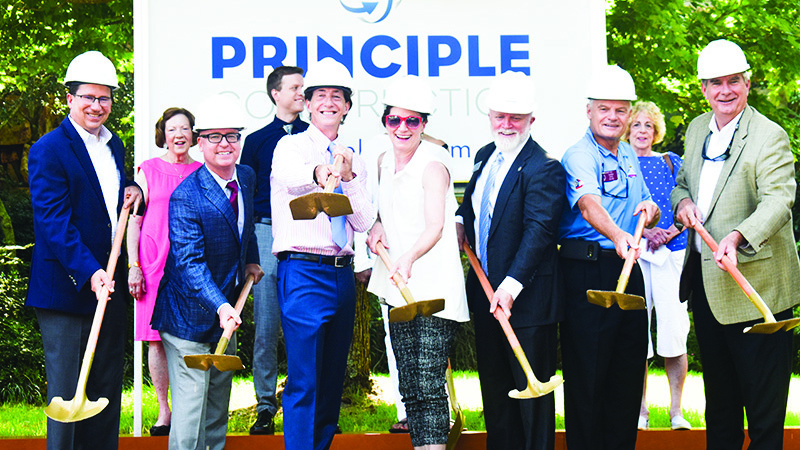 The renovation for the LaGrange Memorial Library is still a long way from being completed, but this did not stop the staff and droves of visitors from celebrating the project’s progress so far.

A groundbreaking celebration was held Monday morning outside of the library’s location at 115 Alford Street to update visitors on the project as well as to thank those who have been involved with it since its start. The ceremony was attended not just by the library’s staff and local leaders, but state representatives as well who have played a role in the $8 million renovation project through its ups and downs through the past year.

“This has been a really challenging time … COVID [happened] in March 2020, it’s endemic to our society right now, and it’s going to be around for a very long time,” said Keith Schuermann, the director of the Troup-Harris Regional Library System. “That has created a very unique challenge to us as public service individuals, and I told staff that they were going to have to have a lot of courage, a lot of faith and a lot of care with serving people.”

Following the invocation, Nix spoke on a library’s importance to one’s community, especially in terms of technological resources.

“The library, when I was growing up, was mainly [there] for children to go check out books … but it’s part of our economic development,” Nix said. “It gives adults as well as children resources that they definitely need to be able to do the things like get a job or find out things about health issues like COVID.”

Robertson shared Nix’s sentiment, and spoke on the importance libraries and books had on his early development. As a former law enforcement officer, Robertson said he recognized the importance a library has in helping people on all economic levels better their lives in communities.

“I understand that poverty is a direct ingredient in public safety issues, and I also understand that libraries play an extremely important part in the safety of the communities, that we’re able to get our young people into a place where they can expand their minds and realize there is hope, and there is fantasy out there,” Robertson said.

Robertson helped issue a $2 million grant to the renovation project, Schuermann said.  A major supporter of the project is the Callaway Foundation, Schuerman said. Tripp Penn, president of the Callaway Foundation, spoke how the library project was one that supported “improving the quality of life” in Troup County. “Last year, our trustees met, and as part of our strategic planning process, we decided that strategic giving moving forward would be dedicated to education and housing,” Penn said. “In general, we want to make sure every child in Troup County has access to a quality education. Projects like this library help us accomplish that vision.”

Through many conversations, the county was able to secure the bulk of the project’s funding.

“It was amazing how easily we could come up with $6 million to put in this project, and we know it’s for the benefit of the community,” said Patrick Crews, chairman of the Troup County Board of Commissioners. “We know that when people come into a community they’re going to look at the hospital, the education system, law enforcement [and] recreation, but we always know that libraries are going to be one of those tough items that people are going to want to know about.”

The library’s reopening was pushed back due to a shortfall in the library’s construction fund following the rise in construction material. This issue has persisted, Schuermann said, and the library now has a $1.1 million gap to fill in order to complete the building’s renovations.