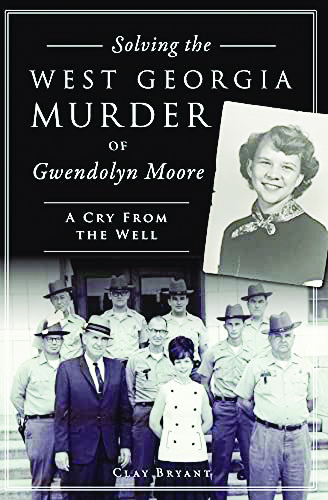 According to the back cover synopsis, her body was hoisted from a dry well near Hogansville in August 1970. Then 15, Bryant witnessed the scene with his father, Buddy Bryant, the then Hogansville chief of police. It was no secret that Moore had been in a violent marriage.

“To the dismay and bafflement of many, no charges were brought. That is, until Bryant followed his father’s footsteps into law enforcement and a voice cried out from the well three decades later,” says the synopsis.

Bryant said he wrote his book while investigating the Moore case in 2002 and 2003.

“I’d come home at night,” he said. “It’d be fresh on my mind, and I couldn’t go to sleep thinking about it, and I started writing. It lay there fallow until last year.”

Bryant may have never had his book published if he hadn’t encountered LaGrange College Professor John Williams, who taught creative writing. After Bryant mentioned to Williams his unpublished manuscript, Williams said he’d like to look at it.

“Within those two or three days, a guy from The History Press called me and said, ‘Hey, I spent the weekend reading your book. I really like it. We’d like to talk to you about getting it under contract,’” Bryant said.

Bryant said publishing the book had been a dream of his and that it was like a gift from God for it to actually happen.

“I’ve got John Williams to thank for it and a lot of other people,” he said.

Bryant said he hopes readers will enjoy the book. Additionally, he hopes it will make potential evil-doers aware that they’ll pay for their crimes.

Bryant has written three other books he may have published in the future. One is about the case of Fred Wilkerson, who disappeared in November 1987, according to CBS News.

“We actually recovered his body,” Bryant said. “He’d been missing for nearly 20 years. We got a successful prosecution in that.”

Another is about a young girl who was kidnapped, tortured and killed.

“Her body was found two years later down in Harris County,” he said. “The guy that killed her, we convicted him. He got a life sentence [and] died in prison.”

Bryant also said he has written about the case of Paul McKeen Jr.

“He was kidnapped and beaten to death, and he was thrown out the back of a truck to make it look like he was in a traffic accident, which it wasn’t,” he said. “But we convicted all the guys that were involved in that.”

He said that starting in September, Investigation Discovery will run a series that chronicles who they think the best cold case investigators in the country are.

“The series is called ‘The Detective Diaries,’” Bryant said. “A two-hour piece on my cases will be one of the first ones that they do.”

When Bryant worked for the District Attorney’s Office in Coweta Judicial Circuit, he attended a seminar in Charleston, South Carolina, which was held by the Naval Criminal Investigative Services, according to the “about the author” section of his book. Having solved four cold case murders in three years, Bryant was recognized as the most prolific cold case investigator in the United States for single-event homicides when he was active in those investigations.

According to Bryant, it can be purchased from Pretty Good Books at 118 Church Street in LaGrange, from Amazon, and from other major book outlets.

There will be a book launch at Pretty Good Books on Aug. 7 from 1 p.m. to 2 p.m., and Bryant said he’ll be there to sign copies of his work.