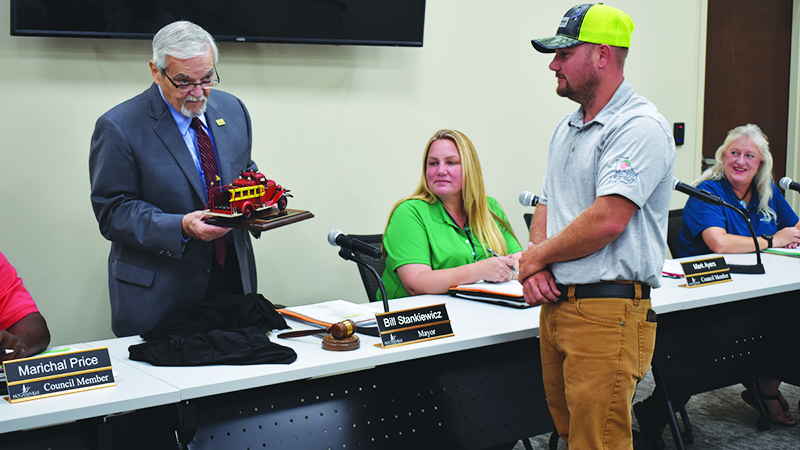 At their meeting on Monday, the Hogansville City Council proclaimed Wednesday, Aug. 11, 2021, as Connie Dansby Day. Dansby will turn 100 on that day.

According to an agenda packet document, Dansby graduated from West End High School in 1942. A faithful member of Shiloh Baptist Church, she served on the usher board, served as the church secretary, served as secretary of the Sunday school for over 50 years and was the narrator of “The Old Ship of Zion” musical program. She worked for Ideal Cleaners and SOS Cleaners in LaGrange, and she established and operated Dansby Cab Company in Hogansville. Her poetry has been performed at church services and special gatherings. Dansby is an avid sports fan, especially of the Atlanta Braves, and she is said to be an excellent piano player. Dansby has two children, five grandchildren, and eight great grandchildren.

“She is the epitome of a good Christian woman and is beloved by her family and friends in and around Hogansville,” says the document.

In other business at the meeting, Hogansville Mayor Bill Stankiewicz acknowledged the department heads in attendance at the meeting and spoke well of city employees. Andy Jones, director of public works, was given a model fire truck for restoring a real one — a 1953 Ford F600 Pirsch Pumper.

In other action, City Attorney Alex Dixon gave a reading on the purpose of an ordinance to amend an alcoholic beverages ordinance, which will be voted on at another meeting. Two things it would do would be to help regulate the consumption of alcoholic beverages outdoors and provide for a special downtown entertainment district within the city.

The council approved a recommendation from the Downtown Development Authority to appoint Jessica Brown-Scott as a new board member and to reappoint Vickie Brown to the board, each for a four-year term.

Planning and Development Director Lynne Miller spoke about a project to send welcome packets to occupants of historic homes.

“At your last meeting, two of you brought up the idea that the Historic Preservation Commission should be sending out information to people in the historic district, answering frequently asked questions and explaining what the historic district is, what are the rules for it, why we have it, and so forth,” she said.

“So, this is something that the Historic Preservation Commission has been working on for a while. And one of their major goals is to provide better information to homeowners, realtors, and others about the city’s historic preservation program.”

Miller explained that there are about 200 properties in the historic district, although some have the same owner. If approved by the council, each property owner would receive a packet with a welcome message and information.

“On one side, you have a welcome and frequently asked questions and copies of the certificate that someone would [receive] for getting approval for doing major exterior changes to their properties, and also the 10 basic standards for historic property rehabilitation,” she said.

On the other side of the packet will be a color-coded map of Hogansville’s historic district area as well as information from a survey of properties.

Miller said the project would cost about $600, for which the council approved a budget amendment.

Lynn discussed changing Boozer Street and King Street to one-way streets for the sake of safety. He said they would be brought up again at the next council meeting.

“The problem we’re going to have with Boozer is Boozer is a very narrow street, even before we put the parking in,” Hogansville Police Chief Jeff Sheppard said.

“Two-way traffic is very difficult on Boozer, emergency vehicle traffic. There’s no parking at all on the street because of the size of the street. When we put [Lofton] Park in, what we discussed is it’s going to be safer to have one-way traffic because of that park. And with it being on the West Main side, the best course of travel would be to come off of West Main into that park. And then, when you move out, you’ll go out to Elm Street.”