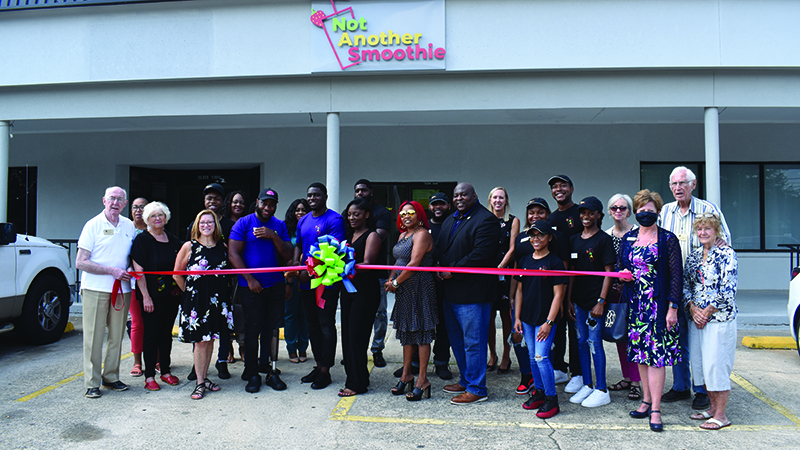 On Thursday, a small crowd gathered for a ribbon-cutting held by Not Another Smoothie Shop and the LaGrange-Troup County Chamber of Commerce. Some were employees of the smoothie shop.

Chamber of Commerce member Leslie Traylor said that business co-owner Brandon Todd was the “epitome” of a great chamber member.

“We thank you so much for being a part of the chamber,” he said. “You’re a great member, and [we] salute you today.”

Todd was the next to speak.

“We have so much potential here in LaGrange and in the Troup County area, and for me to be a part of that potential, it means a lot to me and I’m sure for the community, especially with our slogan being, ‘Where health and taste meets,’” he said. “We don’t have a lot of health stuff around here. To balance it out with a smoothie shop, the only one in Troup County, is exciting.”

“This warms my heart to come back to my hometown and give something that’s good for the community,” business co-owner Xavier Hatten Jr. said. “I went to Georgia State; I kind of felt like I left LaGrange hanging a little bit since I’ve been in Atlanta about seven years now. But [it’s] good to come back and create jobs for the community and do something that’s good for your body and good for your soul.”

In an interview, Hatten said he and Todd had initially considered starting a vegan restaurant but decided that a smoothie shop would be better to start out with, since it would be less challenging. He said that he and Todd had been working on the business for eight to 10 months and that his favorite smoothie is “Tango With Mango.”

Todd said his favorite smoothie is “Training Day,” which contains peanut butter, bananas, and blueberries, comparing the taste to a peanut butter and jelly sandwich.

“It’s on a healthier level because it’s not all of those carbs and not all of that bread and processed stuff,” he said. “It’s fresh, frozen fruit. It’s a high-protein drink, and I work out, so I love the “Training Day” [smoothie].

Hatten said he and Todd decided to accept Google Pay and Apple Pay because Hatten is an Apple Pay user and because the method prevents the spreading of germs during the pandemic. Not Another Smoothie Shop’s grand opening will be on Saturday, August 7 at 11 a.m., according to their Facebook page.