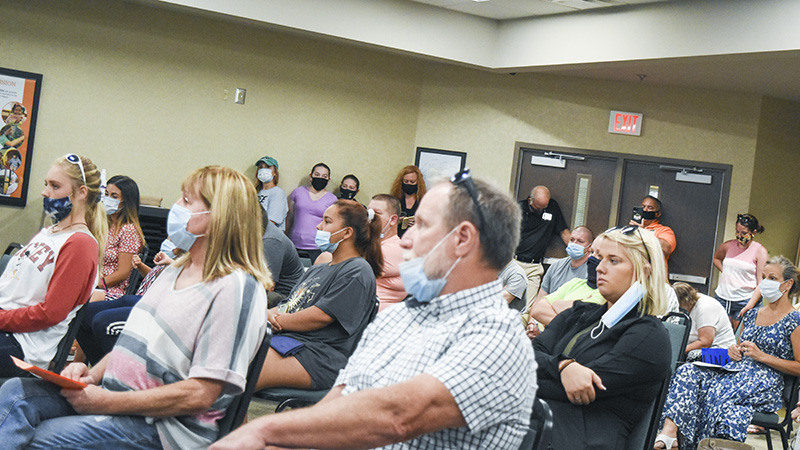 The Troup County School System voted Thursday night to require masks for students at the start of the school year, a reversal from a decision in July that allowed mask-wearing to be optional.

“We have 12,200 kids in this district,” said Superintendent Brian Shumate, while making his recommendation that the board approve a mask mandate. “We’ve got about 50 people here tonight that are represented. There’s also a lot of voices on the other side of this issue. And we hear all, and we listen to it all.”

The vote allows the mandate to be revisited quickly, if numbers start to improve countywide. No exact timeline was given, but the board discussed revisiting if numbers dictate.

The meeting at times got a little testy, as the board allowed the speakers their allotted two minutes to speak apiece and then went forward with their meeting.

A total of 13 people spoke during the public comment portion of the meeting — before the vote. Twelve of the 13 spoke against a mask mandate.

“Y’all are not the ones sitting in the car riders line in the mornings because these babies are getting out in the mornings crying because they don’t want to put these masks on,” said William Cavender, the second speaker. “And ya’ll are not the ones that have to pick them up in the evenings when they’re screaming from headaches from having to wear these masks all day long at school.”

Former School Board Member Ashley Adams noted that the board represented the people and should listen to what the community wants.

“I feel like you are in a position where you feel like you probably need to support this man and his proposal … Unfortunately, he doesn’t represent us,” Adams said, referring to Shumate. “Y’all do. Y’all were elected by mamas just like me … And that’s what you’ve got to think about. He’s not from here … Y’all have to understand what this community wants, and what we’re saying to you right now.”

April Pennington got emotional when talking about the issues her child had faced while wearing a mask. She said if the option was left up to parents, then parents would do the right thing for their children.

“If we’re snotty, or we have a fever or a cough will stay home,” Pennington said. “We’ll do what we have to do. So, don’t take away these learning opportunities for our kids, because these kids don’t learn with masks on. They can’t hear, they can’t speak, they can’t see. They can’t think. They’re being harmed, and please, please, please reconsider.”

Others raised the point that students, especially younger ones, need to be able to read their teacher’s facial expressions.

“The little ones — thank God I don’t have any littles ones right now — because I can’t imagine having to explain to them why they can’t tell if their teacher is smiling,

laughing, or yelling out of anger,” said Dawn Williams.

The board — typically in unison in public votes — was split on the issue.

Hunt noted the change in numbers over the last few weeks as the reason why she voted in support of the mandate.

“We’ve absorbed a lot of information, and I too was very happy earlier in the summer, with the idea that we make masks optional. We were all happy. It was nice this summer to sort of get back to normal,” Hunt said. “We are faced — and school boards across the state are faced — with re evaluating now because things have changed immensely.”

At that point, several in the audience made loud comments, and Hunt had to warn them that they could not do so.

Later in the meeting, a couple of audience members were asked to leave for repeatedly speaking out. They did leave without incident.

Shumate said he knew of 16 students with positive cases as of Thursday, and he expected numbers to increase when students returned to school.

“It’s not just the amount of positive cases, it’s the amount of quarantining that you have to do,” Shumate said. “If I have to send 15 teachers home in an elementary school, that whole school has to shut down because we don’t have enough substitutes.”

Coleman Foss, president of Wellstar West Georgia Medical Center, also spoke at the meeting, though he clarified it was for informational purposes only. Two physicians from Wellstar also spoke to answer questions the board might have.

Foss said that there were 50 COVID-19 patients at WGMC on Thursday, with three or four on ventilators. He said cases are trending younger right now with the Delta variant.

He reminded the board the purpose of wearing a face mask is more than just for the individual.

“The masks are as much for your grandmother, and your parents as it is for the children because you can still carry the virus,” Foss said. “Even if you’re vaccinated, even with a mask on, you can carry and take it home.”

Several board members spoke at length about their opinions. Grubbs and Brooks weren’t there in person but called into the meeting to participate.

Grubbs, a former elementary school teacher, seemed to be leaning against after discussing the importance of younger students being able to learn facial expressions. She later voted in favor, though she said it was with “much reservation.” Blair asked questions about the longterm effects, noting the unknown of the virus in the future, and voted yes on the mandate.

Brooks, who had a various serious case of COVID-19 earlier this year, said he believed mask wearing should be a parental choice.

“I will support whatever the majority of this board does, but as an individual, I am against mandates. Trying to put politics and opinions aside, this should be on the parents. Mamas and daddies,” he said. “Nobody on this board is closer to this subject than I am, and I can say that an absolute confidence because COVID almost killed me.”

Franklin said that he came into the meeting with the idea that TCSS could stay with optional masks, watch the numbers, then determine if anything needed to change. However, then he rethought the idea when he considered the worst possible outcomes.

“How many sick kids is too many? How many deaths is too many? I can answer that question, not even one,” he said. “I don’t want some momma, some daddy, to come up here and say ‘if you guys had done everything you could do’ then my child might still be around the table, might still be around the Christmas tree, might be on Spring week. I don’t want them in front of this desk. So, in my opinion, I’m in support of Dr. Shumate’s proposal.”

Simpson and Jones-Cameron both spoke in favor of the mandate, and Simpson made the motion to approve the proposal.

TCSS sent a press release after the meeting saying it was reopening virtual school options up for students on Monday, which is the first day of class.