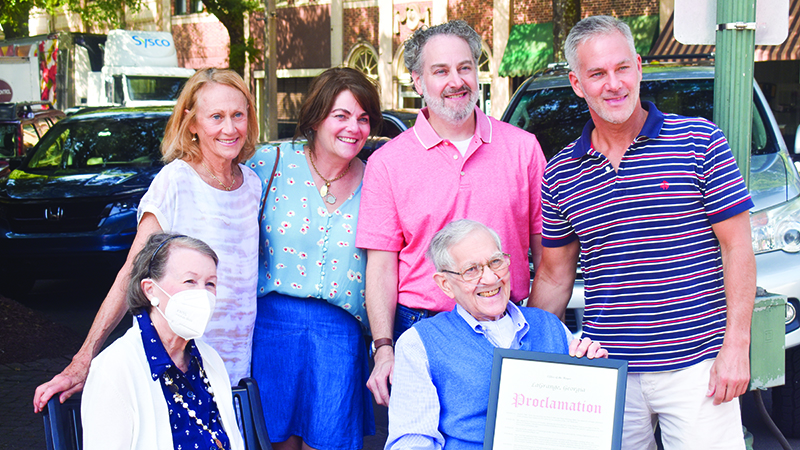 Jake Behr, 84, has had a hand in shaping LaGrange’s present after spending over 30 years in just about every club and organization the city has to offer.

For those years of service, the city dedicated a bench in his honor Friday morning at Flagpole Park, the very spot where his family’s business once existed back in 1939, and highlighted his life and family’s history and how it has contributed to LaGrange’s growth today.

The dedication honored Behr in a town he said he’s loved his whole life.

“I’m so glad I came home, and I absolutely love every grain of sand that is in the city limits,” Behr said.

The plaque on the bench stated: “In honor of Jake Behr on the occassion of his retirement as publisher of Round and ‘Bout magazine 2021-2021. In memory of the Behr family and their ladies clothing store — Behr’s — orginally located at 101 Main Street in 1949.”

For his children, Richard Behr, Jeffrey Behr and Reisha Holton, who attended the occasion with their aunt, Zelda Tenenbaum, and Behr’s wife, Dean Chewning Behr, the dedication brought them together from different corners of the world.

The siblings usually return home once a year. During their childhood summers, they would visit LaGrange to see their grandparents and would climb the moss trees that grow downtown.

“This is the step back in time that we get to return to,” Holton said.

According to the resolution presented at the bench dedication, which was researched and prepared by Lewis Powell of Troup County archives, Behr was raised in LaGrange and graduated from LaGrange High School in 1955 where he was president of the LHS Band.

He attended the University of Georgia, where he graduated in 1959 with a degree in business.

The business would  serve the community for nearly 40 years from its 105 Main Street location. Behr managed the store for many years as well as a location in Dothan, Alabama, where he raised his children.

Jake took over Round and ‘Bout, a local newcomer and tourism magazine, in 2010 and transformed it into a full-color, 80-page magazine with a circulation of 5,000.  He retired from the magazine in February, subsequently ending its nearly 40-year publication.

“He loves this place, he’s poured his heart and soul here,” Holton said.

“And he’s been a great example for us about getting up, rolling your sleeves up [and] getting work done, and we’re so happy for him to receive something like this.”