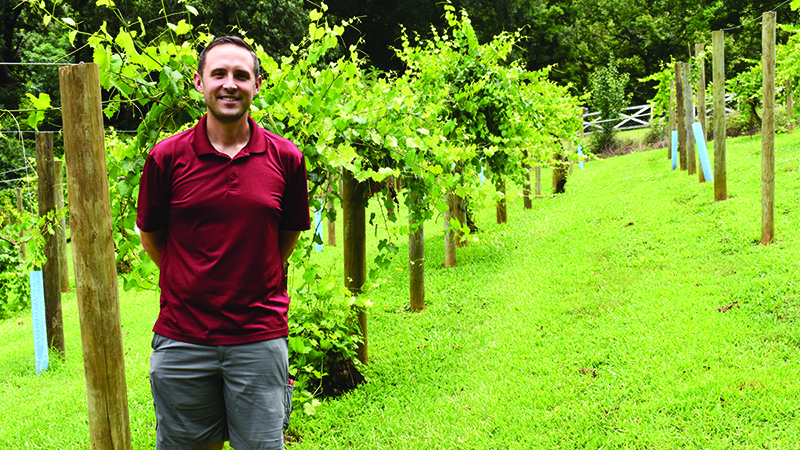 Brandon Rettke will grow muscadine grapes in a vineyard at wedding venue Victoria Belle to use in some of his wines.

Brandon Rettke projects that his new winery, Twin Mills, will open near the end of the year. Located at 103 East Main Street in Hogansville, it will specialize in blueberry wine and mead, an alcoholic drink made with honey. It will also sell grape wine.

Rettke explained that the name of his winery was inspired by two mills in Hogansville, Stark Mill and Reid Mill, which Rettke said used to both stand on opposite sides of U.S. Highway 29 on the north side of town. He said Stark Mill is still standing, whereas Reid Mill was demolished in the 1960s.

“The building is pretty much ready to go,” Rettke said.  “I did have to do some adjustments for sinks and stuff in the back. But for the most part, the whole front of the building was redone several years ago. I’m not entirely sure by whom. It’s formerly the police station and city hall building.”

Rettke will grow some of his own muscadine grapes in a vineyard at wedding venue Victoria Belle.

“It’s basically a partnership between Victoria Belle and myself,” he said. “I do most of the work at the vineyard with the plants, but they maintain the land around it.”

Rettke said his passion for wine began around 2007, when he first went to an apple winery in Southern Illinois.

“I’ve been a fan ever since of the whole process. It’s the only kind of art that I’m good at,” he said.

Rettke said at the apple winery, he enjoyed tasting wine and talking to the winemaker about why the wines got their flavors.

“A few years later, I went with my entire family to Napa [Valley, California] and got to see the process, see the giant presses running, and then go out into the vineyard and see how the trellises are set up and what they’re doing and how you irrigate and what kinds of berries you want,” he said.

“And I helped them put in their first vineyard, and I worked on and off with them, learning the process from the winemaker there, Don Hughes,” he said.

“And then, I just learned from them over the last several years, working together, and then started making it on my own.”

Twin Mills will have several seating options throughout the tasting room.

“I have the old vault where they used to keep stuff locked up, records and whatever,” he said.

“And there’ll be seating in there. It’s got a cool little echo in there when you’re talking. Out front, there will be an area set up that’s like a living room, so you can sit and relax, get in that kind of mood. Or [you can sit at] a dining table. You can have more of that family feel.”

Rettke also said there will be cafe-style seating and a desk that guests can work at.  Guests will be able to taste wine and see parts of the production process.

Rettke serves as the treasurer of the Hogansville Regional Arts association, is a member of the downtown development authority in Hogansville, and serves as chair of the Marketing and Tourism Commission, also known as Visit HGVL.