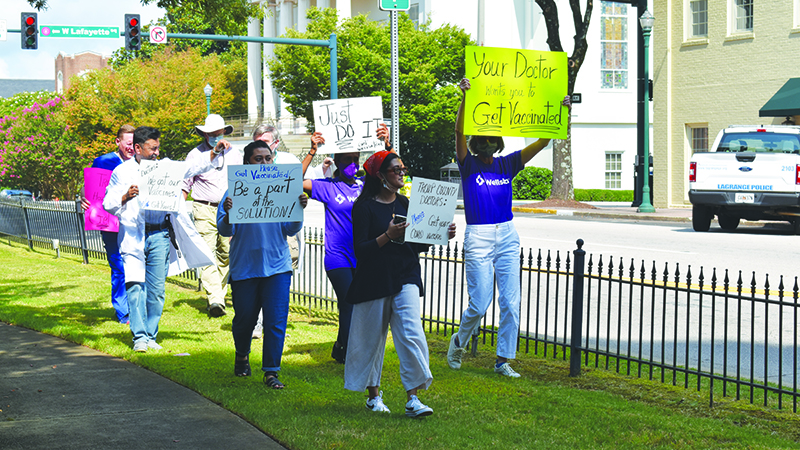 On Saturday, various physicians, healthcare workers, and non-healthcare workers gathered at Lafayette Square with signs urging passersby to get vaccinated. The event was put together by the Troup County Medical Society, according to its president, Dr. Kenneth Horlander, who is also a pulmonary and critical care doctor who works at Emory at LaGrange and Wellstar West Georgia in LaGrange.

Horlander said that because a previous pro-vaccination rally went well, the TCMS decided to hold another one.

“We thought it would be helpful again to help people see that not just their physicians, but other health care workers are also pro-vaccination,” Horlander said.

“Approximately 20 people in the hospital, currently, we would consider critical,” he said. “And they’re using a lot of methods that are very aggressive. For example, very high levels of oxygen with very high flow rates or utilizing non-invasive ventilation. We’re able to keep them from getting intubated at this point. But the sad part is that some of them still, with time, progress to needing to be intubated, and we’re seeing that on a daily basis.”

Horlander said he sees the Delta variant of COVID-19 as being almost like a new virus.

“This is like a new pandemic,” he said. “This variant is different than the variants we’ve had before. For one thing, it’s much more contagious.”

Horlander said the contagiousness of the Delta variant is similar to that of chickenpox.

“With the COVID-19 vaccines, you’re able to fight the infection better. You’ll get over it quicker, you’ll be contagious for a shorter period of time than someone that’s not vaccinated,” he said.

Horlander said getting vaccinated against COVID-19 is very effective at preventing death from the virus.

He added that these things are true for those who are fully vaccinated, meaning that if they’ve had the Pfizer or Moderna vaccine, it’s been at least 14 days since they had their second shots.

He stressed that before those 14 days are up, it’s extremely important to avoid contact with the virus.

When it comes to choosing from among the Johnson & Johnson, Moderna, and Pfizer vaccines, Horlander said he tells people to get whichever one they can get first as soon as they can.

Dr. Kalyani Rajeev said Wellstar Pediatrics, for which she works, has been seeing a lot more pediatric cases.

“Almost three to four times than we did the whole season last spike,” she said. “We already have been seeing that many the last three to four weeks, and we’ve had more admissions already compared to last time, so please get vaccinated.”

“I’m a pediatrician. I’m telling you from what I see in my clinic every day that I’m seeing more kids sick, and they’re sicker than last time,” she said.

Rajeev said that because children under 12 can’t get vaccinated, they should wear masks to protect themselves and the people they come into contact with.

Dr. Kenneth Gordon from LaGrange Internal Medicine said that the age groups with the most COVID-19 cases are shifting from older to younger.

“I think with a lot of the older population being vaccinated, and the mutation of the virus, we’re now seeing more people below the age of 18 getting sick,” he said. “In fact, 18% of the COVID-positive population is people under 18. That group is now greater in number than the people over 60 on a one-week basis. So, you could think one out of every five cases is going to be less than 18 years old.”

Gordon said that last year, 11% of people with COVID-19 were under 18. He said that Louisiana is in a crisis situation.

“They’re about to activate emergency hospital plans to actively do the old Napoleonic style of triage, which means that the people that are going to die, you don’t do anything for because they’re going to die,” he said. “Or at least you do what you can, but you can’t admit them because you’ve got to put all your effort into that one third of the people where it’s going to make a difference if they’re going to live or die depending on what you do. … We don’t want to do that. And the people at the hospitals are getting slammed, and we’re just begging people to please lighten up on all the people working at the hospitals.”

Gordon criticized a “macho” attitude some people have to not protect themselves against COVID-19 because it would show fear.

“Fear evolved for a survival purpose,” he said. “And the idea is you should be fearful of what is dangerous, and that helps to keep you alive. Fearing the vaccine is maladaptive. Fearing the virus is a good thing in a way. I’m not saying you [should] live in constant fear; I’m saying you [should] take the appropriate measures — washing your hands, using a mask and getting vaccinated.”

LaGrange Housing Authority CEO Zsa Zsa Heard and her husband, Titus Heard, were present at the event. She said that a lot of people in the homes she oversees are hesitant to get vaccinated. One reason is fear inspired by the infamous Tuskegee Syphilis Study.

“And then, our younger people that we’ve spoken with state that they just don’t trust the government,” she said.

“It’s just a lot of mistrust. They don’t believe what they say. So, the housing authority is government. That’s what I do — I work for the government. So, I want them to know if you trust that we’re going to provide you with great housing, I also wouldn’t lead them to get a vaccine that I didn’t think was great.”