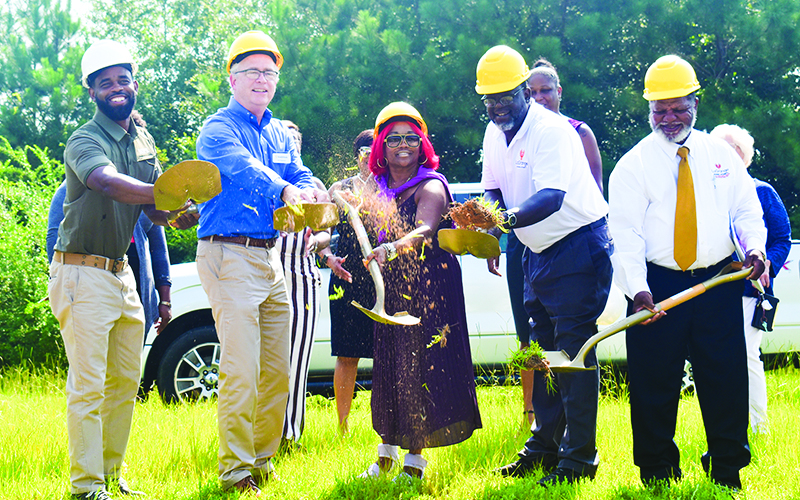 Monday’s groundbreaking at the future Phoenix Crossing housing development was described as something that “has never happened before in Troup County.”

“We are about to endeavor, and we will be placing public housing in a neighborhood in an area that public housing has never been,” said Zsa Zsa Heard, chief executive officer for the LaGrange Housing Authority.

“We will be moving our residents to an area where they get to live and nobody knows that it’s public housing.”

Gone will be the brick walls and other barriers that keep residents in a place where “they can’t get out, ” Heard continued as she pointed out the open space off of Jordans Way, adjacent to Ragland Street.

Phoenix Crossing will consist of three phases, said Earnest Pickett, facilities director for the Housing Authority, and will feature designs that mirror the “working class” houses in the Ragland Street area. The complex will consist of six duplexes in total that consist of a mix of two to three bedrooms.

“We’re focusing on desegregating poverty in the area,” Pickett said.

“These people can have a new concept of ‘Hey, there’s working class over here and even though I’m living in subsidized housing, I can still be the best I can be, [and] my children can see what an education looks like and where it takes them to.’”

As the first off-site development for housing authority residents in Troup County, the housing complex’s location will allow residents to access the Walmart Neighborhood Market as well as the Shuford Fields Sports Complex and several doctors and dental offices in the area. A community center is also planned with the development that can be accessed not just by Phoenix Crossing residents but others in the area as well.

“Instead of trying to bring grocery stores and doctor’s offices into those areas, we’re going to break it up and bring [housing] into an area that’s already thriving,” said Chad Cooper, director of development and marketing at the LHA.

“This is a true mixed-opportunity community.”

Construction on the first phase of the housing development is set to begin in the next few weeks, Pickett said.