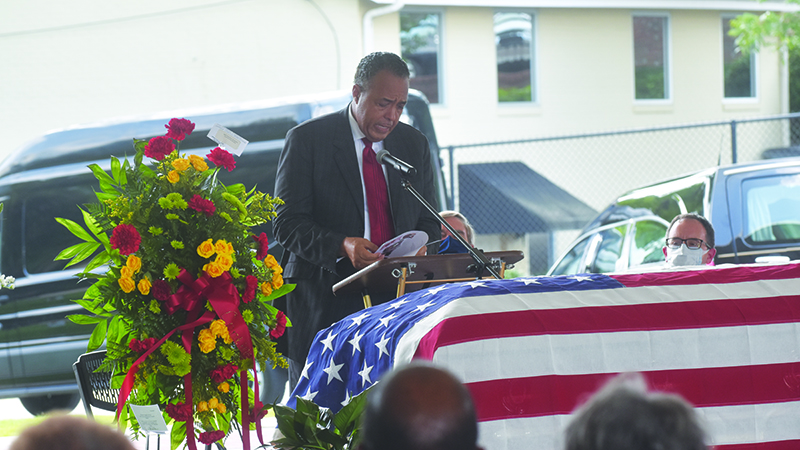 Matthews said that travelling with his grandparents expanded his mind and thanked them for it.

“I’ve always admired my grandfather and grandmother,” he said. “They were always together.”

“Today, we’re here to honor a man that grew up as a second child in a family of 10 in Ft. Gaines, Georgia,” he said. “Now if you don’t know, Ft. Gaines is way, way down in South Georgia. So, this man grew up there in that small community, went and served our country in the military, came back, and for whatever reason — I’m not exactly sure — wound up in Troup County, Georgia and lived in the city of LaGrange. And what a blessing he has been to this community for so many years, and I think to his grandchildren, to his children, to his family. It absolutely is a great honor to be associated with Commissioner Richard English.”

Crews said that Georgia Gov. Brian Kemp had offered his condolences to English’s wife and the community.

“On behalf of the governor, I’d like to take just a moment to read a commendation from his office,” he said. “‘Whereas Richard English Jr. served Troup County as a county commissioner for 43 years, consistently sacrificing his time and energy to promote the best interests of his constituents, and whereas Commissioner English served his country as a soldier in the United States Army, putting his own safety on the line for the freedom in his country, and whereas [he was] the longest serving commissioner in Georgia and the first African American commissioner in Troup County, Commissioner English overcame great obstacles to represent his community. Whereas Commissioner English’s colleagues respected for his expertise and experience, and he could always be trusted to put the interests of his constituents above his own. And Commissioner English leaves a legacy of personal sacrifice and public service, and it’s an honor for me to recognize him for his many contributions to Troup County and the state of Georgia. Therefore, I, Brian P. Kemp, governor of the state of Georgia, do hereby commend his life in memory of Richard English Jr.’”

“He has dedicated his life to improving this city, this county, and this community for all of us, and for those that didn’t have a voice at the table,” Thornton said.

“He was their voice. That’s a tremendous void. It’s something that’s not going to be able to be replaced.”

Edmondson sang “I’m Free” and delivered a eulogy. He said he saw English as a hero.

“You need to understand that 40-something years ago, it was not like it is now in Troup County,” he said. “We still had some places in Troup County that people of color [were] not accepted. But Richard broke some barriers. He made sure that everybody was treated fairly.”

After the funeral, English’s body was buried at Meadoway Gardens Cemetery at 3293 Hamilton Road in LaGrange.