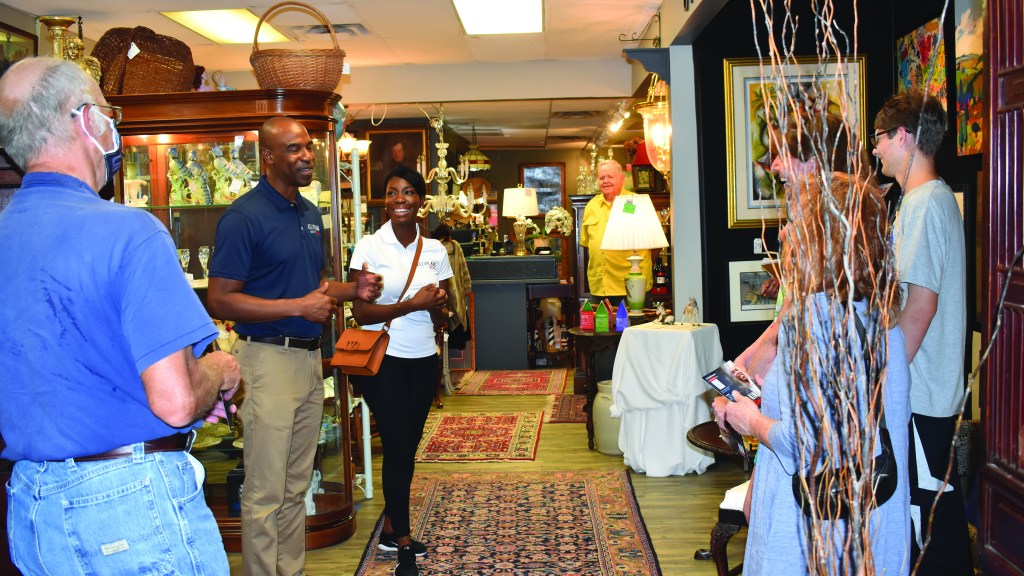 Kelvin King and his wife talked to a small group of people about his campaign, goals, and values.

A handful of people gathered to hear Kelvin speak and ask him questions.

The visit was a part of King’s “Uncancel America” tour, in which he intends to visit all 159 Georgia counties.

“We need to get the majority back in our U.S. Senate,” he said. “It’s no joke; this is a critical time in our nation’s history.”

King said the theme of his campaign is protecting and preserving the American dream, which he believes is under attack.

“We all have our own unique perspective of what the American dream is, but I think it’s bolstered in three tenets,” he said. “I call it freedom, opportunity, and American exceptionalism, essentially being proud of America. … America has worked through adversity, and we’re going to work through this too because people are standing up to help us move through this — this terrible situation in our country’s history, how divisive we are, but those are the three tenets that we’ve got to make sure that we focus on, and I think those are three tenets that can unite the Republican Party.”

“I think those items will help us grab back our economy because right now, paying for people not to work does not help,” he said. “It does not work. It’s all the wrong messaging. It’s wrong actions and messaging, it makes people dependent on the government. … It’s hurting small businesses, labor is difficult to find right now in small businesses, and it’s just not OK.”

King said his second priority after strengthening the economy is prioritizing national defense.

“The military is about good order and discipline, not conforming to all the vast cultures of members that are coming into the military,” he said. “… People should conform to the military way of life and be proud of our military. That’s what our military is. That’s how we keep a strong military. I think we’re going in the wrong direction when it comes to that.”

King said that border security is a part of national security and that “we need to know who’s coming in and out of our country.”

Additionally, he said the country should protect veterans when they leave the military, which he said helps with recruitment.

King said his third platform item is protecting constitutional rights, which he believes are under attack by “cancel culture.”

“We feel like we can’t even say anything anymore without being labeled bad words — ‘racist’ or whatever you want to call it — just for standing up, for flying the flag,” he said. “… The Biden administration and Big Tech are colluding right now. Censoring conservative voices is not okay.”

He said that his “Uncancel America” tour theme was a reference to cancel culture.

“We need to uncancel America and be proud of who we are,” he said.

In response to someone’s question as to how King felt about deficit spending, King said he didn’t like the idea of increasing the country’s debt.

“Politicians are saying that this infrastructure bill, ‘Oh, it’s paid for,’ but I want to see proof, and I want to [be shown] how it’s paid for, what kind of returns, when those returns are coming, and who’s going to be accountable if they don’t come,” he said.

“That is what I would be OK with if I ever had to put a budget together where we had to increase spending. But I would prefer for there to be reduced government spending.

Someone else asked him how he could get rid of the Georgia state tax.

In response to a question about solar panels, King said he encourages free market growth in the energy efficiency industry and that he’s not a fan of the federal government paying people to install energy efficient systems.

King was born in Macon, Georgia to a teenage mother, according to his website.

His mother left an abusive marriage, becoming a single mother to Kelvin and his younger sister, Tameisha.

“My grandmother stepped in to help keep things together, and I love my grandmother so much for what she’s done,” King said. “She retired early from Robins Air Force Base, and she helped us stay together. And I was able to finish high school with honors, and I was a pretty good athlete, as well.”

King was also a young parent.

“I had a son at 19,” King said.  “We make unplanned things happen, but God knows what he’s doing. He doesn’t make mistakes. I thank God for my mom’s decision, and obviously, I’m going to follow that same decision. I’m very pro-life. You have to take care of your obligations; You brought that child into this world, and it’s your charge to take care of that child and turn them into a fine adult who’s not living off the government’s dole, that’s standing up on their own two feet.”

After graduating from the United States Air Force Academy, King served five years in the Air Force as a contracting officer.

“My job was to spend the government’s money,” he said. “I had authorization and the authority to obligate government funds, so I understand how government appropriations work, I know how we can reduce that government spending.”

He now runs a construction company with his wife.