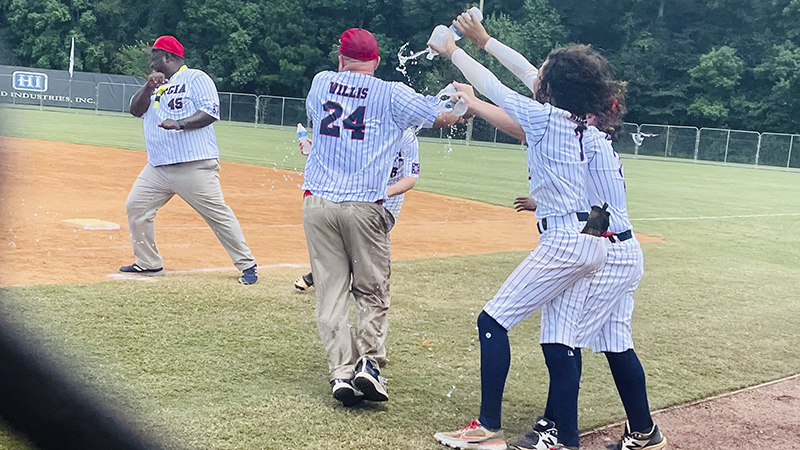 Typically, if a team is down a few runs in the final inning of a baseball game, it’s tough to come back. A few bad swings, a mishit, a bad call — the three outs pile up quickly.

But there must’ve been something special about the Troup County team that represented Georgia in the Dixie Baseball World Series this week, as they rallied over and over again.

Georgia came back from a three-run deficit in the final inning of Thursday’s Ozone division championship game against Tennessee to win the title 8-7 in walk-off fashion.  Chase Mosley walked with the bases loaded to win the game, bringing in Jaiden Russell.

“That was one of the most exciting moments of my life,” Russell said of stepping on home plate to clinch the victory.

As he crossed home plate, the team rushed onto the field in celebration of a comeback they’ll never forget.

The players said their success was all from believing in one another.

“Just never give up,” said Cason Spears, who starred as a pitcher during the world series. “You can always count on other people.”

Many players also said teamwork was the key to their entire run during the world series.

“It’s like a brotherhood because we’ve been together so long, three or four years,” said Kaleb Woodson.

Early on, Team Georgia appeared in the driver’s seat. However, an early 2-0 lead evaporated quickly and the game became a back and forth battle. Tennessee tacked on four runs in the fourth inning, making it appear that a winner-take-all-game — which would’ve been played later Thursday afternoon — would be necessary.

Team Georgia had other plans, again rallying from a deficit late in a game. The team did the same against Florida on Wednesday night, storming back from a late deficit in extra innings to clinch a spot in the title game.

During Thursday’s rally, Woodson had a RBI that brought Georgia within 6-5.

Game tied, that’s when Mosley walked up with the bases loaded.

“3-2 count,” he said. “I was a little nervous at the plate. I was just expected a fastball right down the middle.”

He took the final pitch — a ball outside the strike zone — walked a few steps and then it appeared to hit him that the team had just won the title.

“We just thought we had to fight and battle and try to come back and win,” said Brady Willis.

Standing on the on-deck circle, Davis Moncus, was ready for his opportunity, if he got one. But he was pretty confident that Mosley was about to end the game, one way or the other.

“I knew he was going to be walked right there,” Moncus said.

Woodson said he grabbed the water cooler, ready to dump it on his coaches in celebration.

Torrieon Delaney had just been walked and was standing on first base when the game ended.

Like his teammates, he said the comeback was another showcase of great teamwork.

“Team effort and a lot of energy in the dugout,” Delaney said.

He said the team kept encouraging each other when it looked like a loss.

“It’s not over,” Delaney said, recalling what the players said to each other. “Keep playing and fight to the end.”

Woodson said when Mosley walked to the plate, he was already getting the water cooler ready.

Woodson was the participant for Team Georgia in the home run derby at the start of the week. He didn’t win, but he hit more home runs than anyone in the overall competition.

Matthew Skinner said he made sure everyone stayed loud in the dugout, even when the outcome looked bleak.

“We are clutch,” he said. “The bats started coming alive at the right time.”

Coach Jason Willis said the team fought back many times during its 10-game win streak.

“We’ve been through a lot adversity, and we got down a couple times in the state tournament, battled back and found a way to win,” he said. “We found a way to win last night. We were really having a hard time. The kids keep fighting and never quit until the last out. That’s what I preach to them that last inning. No matter what happens we are going to fight so if we have to play another game we’ll be ready to go.”