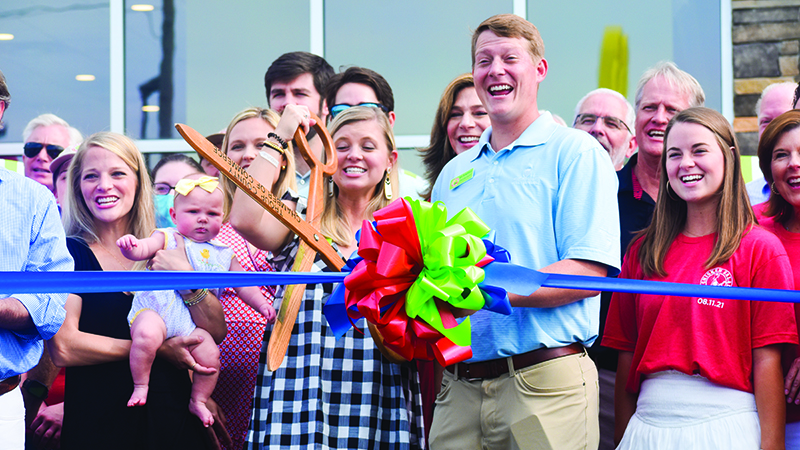 Ever since Allison Bradford started working for Chicken Salad Chick in 2015, she wanted to open a location in her hometown of LaGrange. For years, she never received a “no” from corporate but heard plenty of “not yets.”

On Wednesday, Bradford finally got her wish and officially opened the new Chicken Salad Chick on Lafayette Parkway outside of the LaGrange Mall, a business she’ll be running with her husband, Bo, as well as his parents, John and Nancy, with her four-month daughter, Evans, in tow.

“When I started working for Chicken Salad Chick…I instantly knew I landed in something amazing, and I wanted to bring it [to LaGrange,]” Bradford said. “It’s been a long season of waiting, but we made it. I truly can’t believe it, there were times when I thought I’d never see the day.”

The ribbon cutting to commemorate the eatery’s opening was attended by Chicken Salad Chick corporate officials, officials from the LaGrange-Troup County Georgia Chamber of Commerce, the eatery’s new team and a host of locals. As Bradford and others gave their thank-you speeches just after 10 a.m., a line of eager customers had already begun to form around the store-front and drive-thru.

The franchise offers over a dozen varieties of chicken salads along with pimento cheese or egg salad, served by the scoop, sandwich, or bowl, as noted on its website.

Stacy Brown, founder of Chicken Salad Chick, was there to celebrate with Bradford, and recalled her own ups and downs with getting her franchise off the ground and on to its first location, let alone its 200th.

“In 2007, when I was knocking on doors, praying in hopes that the person on the other side would want some chicken salad, I did not think we’d be at our 200th location,” Brown said as she held back tears.

Bradford went to work for Chicken Salad Chick right out of college and worked as a corporate trainer and then community marketing manager over the course of six years.

“We’ve seen this child grow,” Brown said. “We’ve witnessed milestones [like] her marriage, her child and now her next path in life. And I’m so happy for LaGrange because [it] could not have two better hosts in this community.”

Bradford said the LaGrange location took longer to open than the franchise had hoped, and she had to juggle the plans for the eatery on top of becoming a mother in April when her daughter was born.

“Neither in my wildest dreams did I think the two would happen within four months of each other,” she laughed.

Tom Carr, chief marketing officer for Chicken Salad Chick, while proud of Bradford’s success, said he would miss her on his team.

“We hate to lose her from a marketing role because she’s very talented,” he said.

“She worked with so many of our franchise owners, and now she’s come full-circle and she’s the one we’re helping.”

Chicken Salad Chick is open 10:30 a.m. to 8 p.m. Monday through Saturday. The business is closed on Sundays.