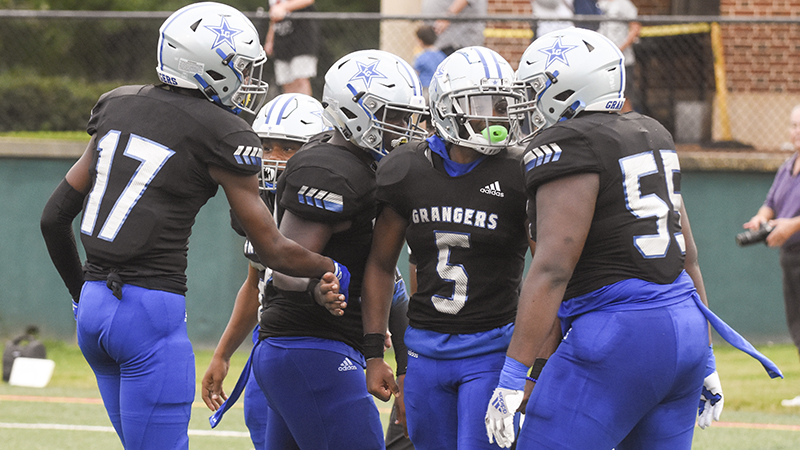 It was a great opening night for the Grangers.

LaGrange took control early and cruised in the second half during a 24-6 opening win over Upson-Lee on Thursday night.

LaGrange led 24-0 at the half, gave up an opening second-half scoring drive, and reclaimed momentum quickly behind a stifling defense that gave the Knights little room to run.

“Any time you play football and play a season, you take it one game at a time. And this was our first game, and we wanted to win the opener,” said LaGrange coach Matt Napier. “That was important to us and our opener.”

The Grangers struck right away on a 69-yard touchdown pass from Tae Snead to Kobe Jones on an early third down. Jones maneuvered all the way across the field — making defenders miss along the way — and gave LaGrange a 7-0 lead with 10:16 left in the first quarter.

The Grangers had another great drive — highlighted by a Malachi Render-Fannin run— but penalties ended the momentum.

Montavious Martin intercepted a pass deep in Upson-Lee territory and returned it 19 yards for a touchdown, but a holding penalty brought back the return. It didn’t matter, as Snead took it on a 6-yard touchdown rush a few plays later to put LaGrange up 17-0.

After another stand by the defense, a poor punt set the Grangers up in great field position.

Render-Fannin ran down the home sidelines and dove for the pylon on an impressive run that gave the Grangers a 24-0 halftime advantage.

“We came out and played really, really well offensively,” Napier said. “Made a lot of plays and were able to execute at a high level. We got a little conservative in the second half, but that’s what happens when you are playing with a little bit of a lead and playing a quality opponent.”

There were no other points for the home team, but none were needed.

Upson-Lee marched right down the field to begin the second half, running right up the middle of the Granger defense on most of the runs. The two-point try was broken up and the Grangers’ defense didn’t allow Upson-Lee to mount another serious scoring challenge the remainder of the game.

“The growth our team and our kids have made since last year week one when we went down to Upson-Lee to tonight was tremendous. I’m just proud of them,” Napier said. “Nowhere near perfect. Nowhere near good enough, but the growth we’ve made — if we continue to do that throughout the year, I’m excited about our ballclub.”

LaGrange will play at Northside next week.