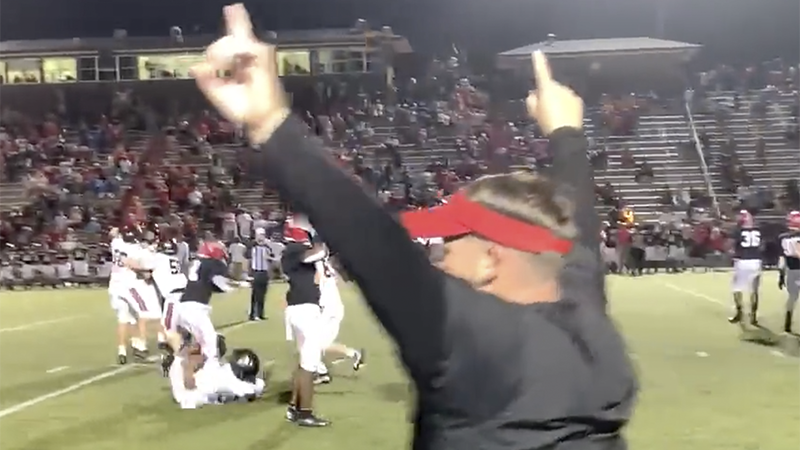 Blake Eubanks nailed a 42-yard field goal with two seconds to give Callaway a thrilling road victory over Opelika in the Cavaliers’ season opener.

It was the first time on the field for Callaway since last season’s AA state championship victory, and the Cavaliers and Bulldogs made sure it was worth the price of admission. Callaway added a last second touchdown as Opelika tried to lateral the ball on a kickoff in a last-ditch effort to win, making the final score 30-21.

The game was back and forth the entire way.

Deshun Coleman hit Carlos Billingslea on a 45-yard touchdown in the first quarter to put the Cavaliers up 7-0. That was the only score in the first half, as the Cavalier defense forced three turnovers, including an interception by Jarvis Parks on a half-ending hailmary attempt by the Opelika.

After a defense-dominated game in the first half, the offenses came alive to combine for five touchdowns in the second half.

The second half scoring opened with Jarell Stinson finding the end zone for Opelika on a 10-yard touchdown run midway through the third quarter. That tied the game 7-7.

Coleman connected with Quenderious Redding on a 70-yard strike to put the Cavaliers up 14-7 just moments later. Stinson answered with a hard-fought 22y-ard touchdown, where he ran through the Cavalier defense into the end zone.

Callaway answered again, with Kier Jackson taking it in from a short distance to give the Cavaliers a 21-14 lead with 8:45 to play. After a deep kickoff return by Shawn Jones, Opelika scored quickly on a 15-yard run by Kaden Cooper to again tie the game.

Opelika had the ball, with a chance to go down and win the game, but Cam Smith picked off a pass in Bulldogs territory with 1:42 left. That set up the Cavalier offense, which put the ball in Eubanks’ range.

The senior kicker did the rest, splitting the uprights.

Opelika tried to lateral the ball on the ensuring kickoff, but it ended up in the end zone, where the Cavaliers recovered to earn a nine-point victory.