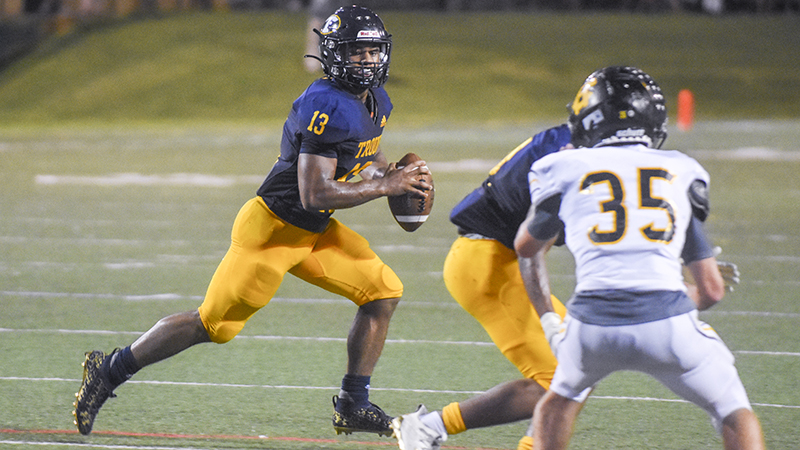 Troup Head Coach Tanner Glisson said he thought the Tigers needed a touchdown, given how successful Harris County had been moving the ball, so he rolled the dice on a fourth down call with the game on the line.

The Tigers came through.

Taeo Todd connected with Presley Mcdaniel on a 3-yard touchdown on fourth and goal, and the Troup defense held on as the Tigers defeated Harris County 28-21 on Friday night at Callaway Stadium.

Troup led 14-0 in the first half and looked like it might cruise, but three rushing touchdowns by quarterback Cooper Corey brought Harris County roaring back.

Following Mcdaniel’s touchdown to take the lead, CJ Sands intercepted a pass with 5:14 left and Troup was able to run out the clock.

The first score was set up by a Harris County miscue on a punt, which allowed Troup to take possession at the Harris County 24-yard line. On a key third down and 14, Todd connected with Ivyon Hargrow for 16 yards to keep the drive alive.

That play set up a 6-yard touchdown run by Javari Fannin with 4:27 left in the first quarter.

The Tigers’ defense held strong in the second quarter, with interceptions by Qua Moss and Nazir Easter to stop Harris County drives. Easter’s interception came after a special teams mistake by Troup, as a high snap sailed over the Tigers’ punter’s head on fourth down. Easter picked off the pass at the 1-yad line.

Todd added another touchdown in the second quarter on a 36-yard rush down the home sidelines. He beat a defender to the end zone and reached for the pylon, giving Troup a 14-0.

Harris County stuck around though.

Corey scored on a 10-yard quarterback keeper with 1 minute left in the second quarter. On Harris County’s first possession of the second half, the visiting Tigers kept the momentum going. Corey faked out the defense on a 34-yard touchdown rush.

Troup answered with a 7-yard touchdown pass to Dwartney Wortham, who had made a spectacular grab on the drive to set up Troup in scoring position. The Tigers led 21-14 with 4:19 left in the third quarter.

Harris County answered quickly, as Corey again faked out the defense and ran 48 yards for a game typing touchdown with 1:43 left in the third quarter.

Troup was aggressive on its next possession, going for it on fourth and 6 at its own 46-yard line. Harris County held on the final play of the third quarter. Harris gave it right back on the next play, as the Tigers fumbled and Sands came up with the recovery.

Troup marched into scoring position and on fourth and goal Todd hit Mcdaniel for the game-winning score. Todd’s arm appeared to be hit on the throw, but he still found McDaniel in the middle of the end zone.

Glisson said he learned a lot about his team, especially considering how well Harris County played.

“They came out and did something totally different than we thought,” he said. “We thought they were going to throw it all over the place and they came out and leaned on us. We’re kind of small on defense and we know when people come out and try to lean on us that we are going to have some issues and it was humid and we were tired.”

The Tigers lost three players due to COVID-19 protocols prior to the game, Glisson said, but even a little shorthanded, the offense was firing on all cylinders.

“Our offense was really good tonight. I don’t know how many yards we ran for, but it had to be close to 500,” he said. “Offensively, we ran the ball really well. That makes me really happy.”

The Tigers will host Callaway next week in a battle of crosstown rivals.