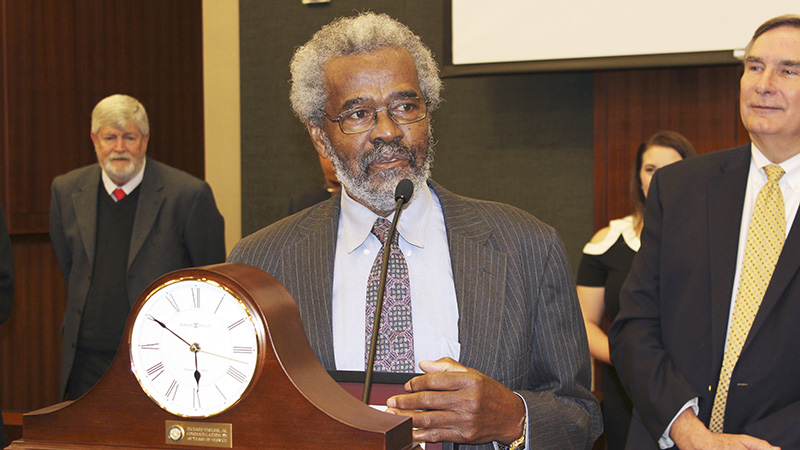 Starting at the Board of Commissioners’ meeting on Sept. 7, 2021, the August recipient will receive “The Richard English, Jr. Strongest Link Award of Excellence,” according to a press release from Troup County.

English served on the Board of Commissioners representing District 5 for 43 years and was the longest-serving commissioner in the state of Georgia at the time of his death, according to Commission Chairman Patrick Crews. He’s also the only Black commissioner in Troup County history.

Crews said the change was to honor English for his dedication and service to the community.

“He served as a county commissioner longer than most people will work for the county, very few people would achieve that length of service,” Crews said.

“He was a good commissioner … and he knew how to work with people to get things accomplished. He was always worried about, what I call, the little man, the small business owners. There were two things he was always going to be interested in, and one of them was [the minority community] and [the small business man.]”

First presented in July of 2019, The Strongest Link Award of Excellence recognizes an employee each month, and each year, who has proven to be the “strongest lLink” by presenting a good attitude and strong work ethic between the Troup County government and its citizens. Along with various contributions made by local businesses, recipients are awarded a plaque which commemorates their exceptional efforts.

Crews notes that during the last year of his life, English health was failing, but his dedication to attend meetings and contribute to the betterment of the community stayed strong.

“He had that determination, and I know personally from being in meetings that he was talking about the employees and trying to make sure that they were compensated and that we were doing the right thing,” Crews said.

“My biggest goal has always been to leave Troup County better than I found it,” Gaddy said.

“I knew I wanted to find a way to boost employee morale and give back to those who work for Troup County, so Eric and I worked together to create The Strongest Link Program.”

Troup County Human Resources Director Valerie P. Heard said she looked at the change as an incredible way to honor English’s memory and his commitment to Troup County for so many years.

“I was very excited at the inception of this award program because it’s a way to honor and reward employees for their hard work and dedication to Troup County,” Heard said.

“Renaming the award to ‘The Richard English, Jr. Strongest Link Award of Excellence’ is a highly deserved and appropriate act of recognition for the program.”