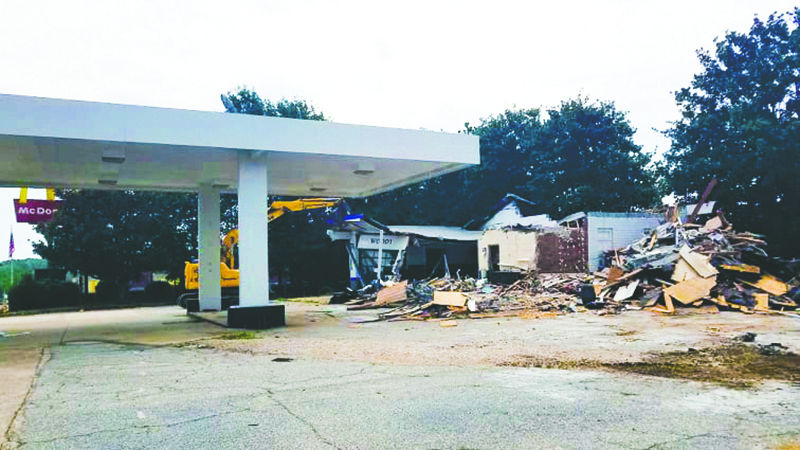 Woody’s Service Center, a notable business in LaGrange for over 50 years, was torn down earlier last week, and plans are in place to use the land the station once sat on for a new eatery.

Drivers driving along Commerce Avenue may have noticed the sight of construction crews clearing out a spot next to Holmes Pharmacy, and subsequently, the absence of a historic LaGrange landmark.

Woody’s Service Center, which closed earlier this year, was torn down last week, and crews have been clearing the plot of land for future development ever since.

“It was a sad sight to see it come down,” said Greg Woody, who helped run the business with his father, Wiley Woody, and son, Levi Woody. “We were there for 51 years. It brought some tears to my eyes.”

The people who bought the building plan to redevelop it into a Freddy’s Frozen Custard & Steakburgers, a fast-casual restaurant chain that has locations all over the country, including one in Newnan, Greg said.

The business was closed in May following the Woody family’s decision to close it and move on.

The business has been a staple atop Commerce Avenue since 1970 after Wiley Woody first opened it.   In 2019, the business closed its fuel business, discontinuing the practice of filling gas tanks and washing windshields at the gas pumps, but continued to fix automobiles and rent U-Hauls to customers old and new. Greg noted that, to his knowledge, up until 2019, Woody’s was the last operational full-service gas station in Troup County. In its final days, it stayed open only to rent out U-hauls.

Despite the tragedy of losing what felt like a second home, Greg said the family is continuing their lives as usual. He took a job at Fryer’s Tires Center following a three-month break, while his son, Levi Woody, is continuing with his own landscaping business. Wiley Woody, the man who started it all, is doing well also.

“We miss it already…but it’s a new chapter in our lives now,” Greg said.