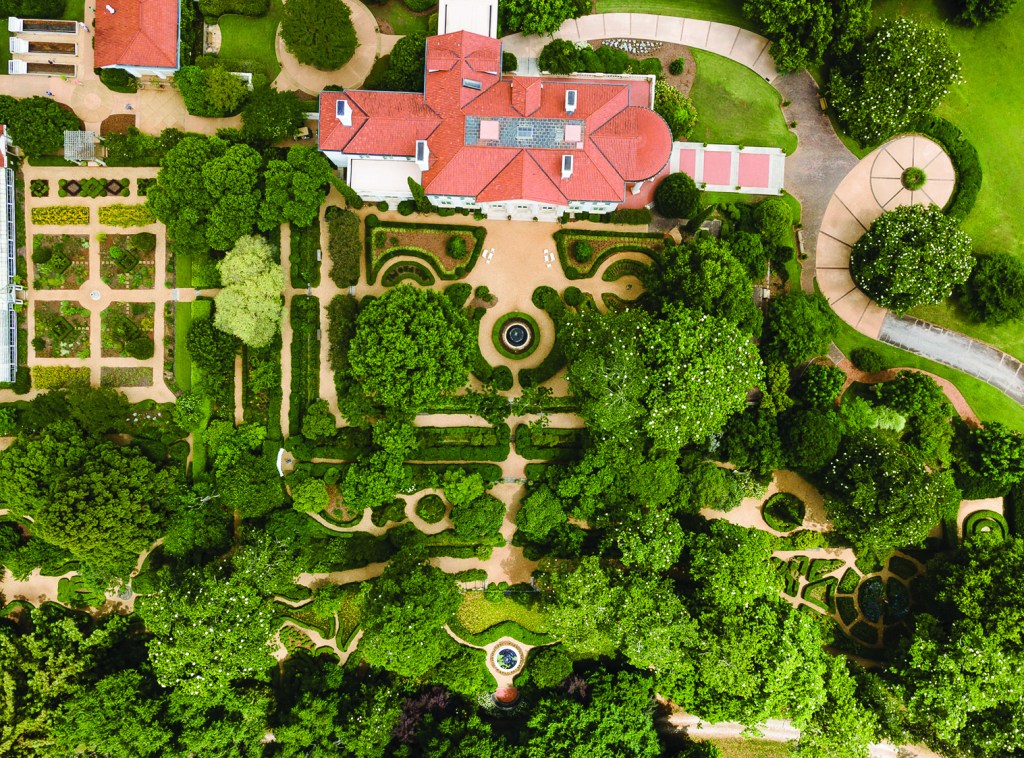 After being given land by her father, Mickleberry Ferrell, in 1841, Sarah Coleman Ferrell started expanding a small formal garden begun in 1832 by her mother, Nancy Coleman Ferrell. Between 1841 and 1903, Sarah planted thousands of boxwoods. Over time, her garden became widely known as “Ferrell Gardens” and received acclaim as one of the finest gardens in the Southeastern region of the United States. Sarah’s original designs for stone walls, boxwood and terraces still exist today.

During the 1890s, Fuller E. Callaway, a young aspiring businessman, often visited with Mrs. Ferrell in her garden, and she hoped he would be able to purchase the property after her death since he had a great appreciation for the gardens. In 1903, at the age of 87, Sarah Ferrell’s steps no longer tread the paths of her beloved gardens, and her husband, Judge Blount Ferrell, did his best to maintain the gardens until his death in 1908. Garden maintenance was interrupted until the property was, indeed, purchased by Fuller and Ida Cason Callaway in 1911.

Shortly after purchasing the historic property, Fuller E. Callaway, by then a very successful textile manufacturer, commissioned the noted architectural firm of Hentz and Reid of Atlanta to design their new home. The home was built on the site of the old Ferrell homestead and was designed in the Italian villa style to complement Sarah Ferrell’s existing four-acre terraced boxwood garden.

Completed in 1916, the Callaway home is widely regarded as one of Neel Reid’s finest designs and has been called “a landmark of the American Renaissance.”

When Ida Cason Callaway assumed responsibility for the garden in 1912, she began restoring and later expanded the gardens.

At Neel Reid’s suggestion, fountains and pieces of classical statuary were added to complement and enhance the Italianate character of the garden.

Ida kept and loved the boxwood paths and beds and added other highlights to the garden, nurturing it until her death in 1936.

Beginning in 1936, Fuller E. Callaway, Jr. and his wife, Alice Hand Callaway, took over care of the house and garden, giving them the same loving attention. A novice gardener, Alice was initially overwhelmed by the prospect of caring for historic Ferrell Gardens but over the years she became an accomplished horticulturist.

Alice continued to preserve the gardens and maintain Sarah Ferrell’s original design for 62 years, as long as Sarah herself, until Alice’s passing in 1998.