Gov. Kemp campaigned in LaGrange. We asked him about the difficulty local companies are having filling jobs. 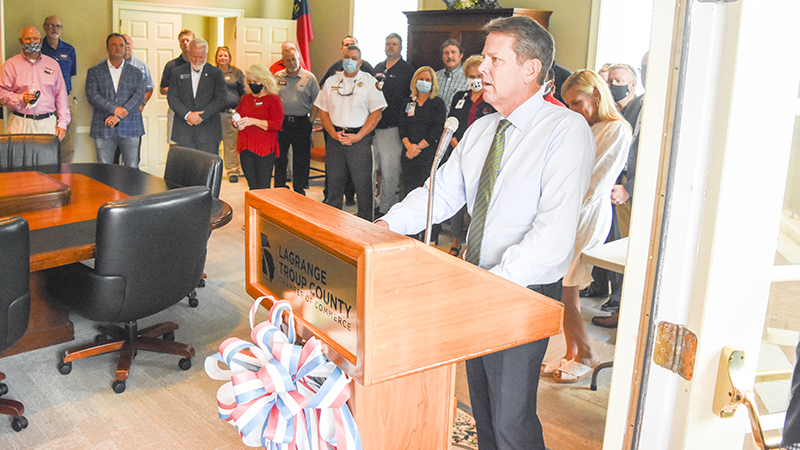 Georgia Gov. Brian Kemp visited LaGrange Monday for a quick meet and greet as he continues his 2022 re-election campaign around the state.

Kemp, a Republican, spent a few minutes talking about the current crisis in Afghanistan, violent crime, drug trafficking, gang violence and the COVID-19 pandemic to a room full of local leaders.

He also spent a few minutes focused on the Justice Department lawsuit against Senate Bill 202, the voting law that has been a hot button issue around the state and nation.

“When I was Secretary of State for nine years, I always said, we want to make it easy to vote and hard to cheat,” Kemp said. “We need to have secure, accessible, fair elections in Georgia. And that’s what we have.”

The controversial bill, in part, requires voter ID on absentee ballots, limits the use of ballot drop boxes and expands early in-person voting.

“Unfortunately, we have multiple lawsuits, including the nation’s highest law enforcement agency, the Justice Department, suing us, but you can count on me to take off where the legislators ended with their vote to pass Senate bill 202,” Kemp said. “I have defended it, and I will continue to defend it because it’s a good bill.”

As part of his speech, Kemp noted that Georgia’s unemployment rate was back down to 3.7%.

“You hear a lot of people talk about Florida and Texas, and they’re two great states,” Kemp said. “But of the 10 most populous states, Georgia has the lowest unemployment rate.”

Kemp sat down with The LaGrange Daily News for an interview following his speech and was asked specifically about the unemployment rate and how local businesses, such as restaurants, continue to struggle to find employees. Many local restaurants have had to shut down or change their hours due to the limited number of employees they have available.

“We have to keep focused on workforce development,” Kemp said. “But I also think it’s going to take a little time. I think the economy is getting reshaped. A lot of displaced restaurant workers may now be working in a manufacturing plant somewhere, so it’s just a really unique environment out there.”

Kemp was also asked about the COVID-19 pandemic. Troup County has seen 486 new cases over the last two weeks and three public schools have been closed since Wednesday due to rising cases.

“The answer is getting people vaccinated,” Kemp said. “There are one or two things are going to happen. The Delta variant spreads so fast, people are going either going to get COVID-19, and they’re going to have natural antibodies, or they’re going to get vaccinated … You can debate mandates for masks and vaccines and shutting down or not, and every state in the country is dealing with this, and if they’re not, they’re fixing to be.”

Kemp said his biggest concern is ensuring that hospital workers have the staff they need to deal with the rising numbers.

“The problem is you’ve got a lot of the rural hospitals that had beds, they just don’t have enough staff. Because there’s literally a nationwide shortage … A lot of health care workers are worn out. They don’t want to work in that environment. A lot of them retired. And so we’re trying to help augment that staffing. We just announced a few days ago an additional $125 million to help hire up to 1,500 people.”

Kemp urged people to talk to their doctor, or another healthcare professional, about the vaccine to get accurate information.

“At this point, there are so many people fighting over mask mandates, vaccine mandates and shutting down or not,” he said. “I just don’t think that controversy is good. I think what we need to do is have honest conversations with people. That’s why I was saying today, you know, talk to somebody you trust. Not many people trust the government, especially the federal government at this point when the president says, get vaccinated, take your mask off. Now, they’ve gone a 180 on that. They’re saying put your mask back on.”

“There was a survey, some polling, that said three out of 10 people had not gotten it because it hadn’t [gotten] final approval. So, we’ll see if that plays out,” he said. “I hope that’s the case. But the point is, if people are considering getting vaccinated, I would tell them to make that decision with prudence because the Delta variant is spreading so fast that if they wait too long, it’s going to be for naught.”

Kemp was also asked about local schools and his concern with students going back to the classroom. He said he wants to keep control of those situations at the local level so that superintendents and school boards can make quick decisions. He said a “one size fits all” approach doesn’t work statewide for schools.

“I get that there’s been a lot of controversy at the local level, but that’s really where it should be. LaGrange- Troup, County schools are different than Fulton, Atlanta, Georgia. They’re different than Clark County, Athens, Georgia schools. It’s best in my opinion for the locals to make those decisions,” he said. “Our superintendents did that really well, all of last year, and they need to be able to move quickly. And if schools need to take a break, let things calm down, we’re going to support them.”