Community members raise over $90,000 for the Thread in dance fundraiser 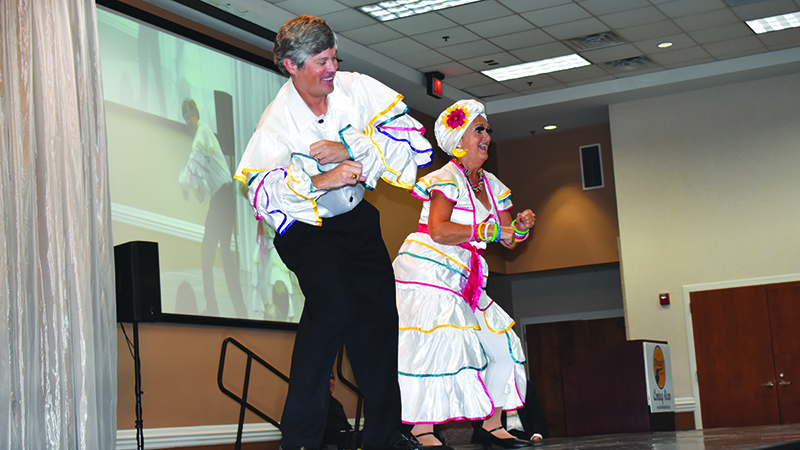 On Saturday at the Callaway Conference Center at West Georgia Tech, six couples danced in the third annual Dancing for the Thread competition, which raised $94,676.62 of its $85,000,00 goal for Friends of the Thread.

The event had three judges who scored the dancers based on their creativity, dance technique, costume, stage presence, and performance.

The competing couples were Cathy and Jim Arrington, who danced to “Great Balls of Fire;” Connie and Chalton Askew, who danced (and Connie sang) to “Giving You the Best I Got;” Traviera Sewell and Kane Bradfield, who did a cheerleading-style dance to “Get Ready for This;” Dana and Brian Shumate, who danced to “You’re the One That I Want;” Debbie Burdette and Jake Jones, who danced to “Limbo” by Daddy Yankee; and Sandy Lee and Sam Shaw, who danced to “Dance Medley,” a mix of different songs.

Jake Jones and Debbie Burdette were the winning couple, being presented with disco ball trophies by Metcalf and Friends of the Thread Executive Director Natalie Hale.

Burdette is a LaGrange native who married her high school sweetheart 1973. A mother of three, she has three grandchildren.

“She’s a member of First Presbyterian Church where she has served as an elder, deacon, and Sunday school teacher; committee member for the National Day of Prayer; and a volunteer with their youth leadership program,” Thornton said. “She served on the Troup County Board of Education as an elected member of the school board from 2001 to 2016, and she has appeared as Mama Jama, the Storytelling Mama, since 1993.”

Jake Jones, another lifelong resident of LaGrange, graduated from LaGrange Academy and the University of Georgia.

“He has worked for Synovus for the past 17 years, and is currently its market executive for LaGrange,” Thornton said.

Jake Jones is married and has two sons.

The presenting sponsor of the event was Wellstar. There were 24 other sponsors listed in the program.

The Thread is a non-motorized, multipurpose trail in LaGrange intended to be used for “fitness, recreation, transportation and special events,” according to thethreadtrail.org. Construction on The Thread started in March 2017.

The first 13 miles are planned to be finished by the end of 2022. 29 total miles of trails are planned.

“Friends of The Thread (FOTT) was formed in August 2016 to partner with city and county leaders in implementing the plan,” says the Thread website. “FOTT is playing a significant role in community relations, segment planning, contractor selection/management and future maintenance of The Thread. FOTT is a 501(c)3 tax exempt organization.”