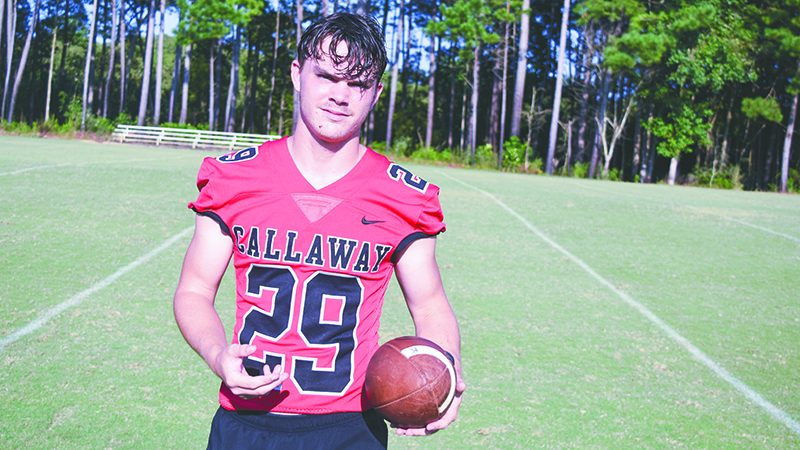 With the game on the line Friday night in a hard-fought game against Opelika, Callaway found itself tied with only seconds to play.

Many high school teams in that situation would need to throw a last second Hail Mary in hopes of avoiding overtime, or to call a trick play full of laterals and hope something broke right.

But not every team has Blake Eubanks.

Eubanks, the senior kicker for Callaway, confidently stepped onto the field, lined up a 42-yard field goal, and kicked it through the uprights to give the Cavaliers a season opening victory. (Following the field goal, Opelika had a few seconds left, tried to lateral the ball on a kickoff return, and the Cavaliers recovered in the end zone to make the final score 30-21.)

Eubanks admits he was surprised when he found himself in that situation. Even though he and the Cavaliers practiced for it over and over, it was different to find himself actually in that moment.

“It was a surprise because I never thought I would have to make a game winner,” Eubanks said. “I just had to get in my head that it’s my time. I’ve got to show up for my team, and give them this win.”

Eubanks has plenty of leg, as he’s made 52-yard kicks in practice.

“When it came off my foot, it felt pretty good,” Eubanks said. “I had a feeling that it was going in.”

Coach Pete Wiggins said they practice pressure kicks like that regularly, and Eubanks and the rest of the Cavaliers have put in the work to be successful in crunch time.

“Blake and our field goal team have repped so many times at practice under pressure and in situations that we feel that prepare them for the game,” Wiggins said. “A lot of work went into making that kick, and he’s put the time in.”

When the kick went in Friday, teammates jumped all around him in celebration. He said that support is what makes Callaway special.

“The team has got my back,” he said. “I’ve got their back, no matter what. We’re just one big family. And we have jobs we’ve got to do and we all do our job. That’s why we have had such an amazing season every year.”

“We’re hyped, crosstown rivals. We’re all getting ready,” he said. “We just can’t wait to play them. It’s always the game, for us, of the year.”

Eubanks also plays forward for the Callaway soccer team. His parents are Miranda and Jerry.