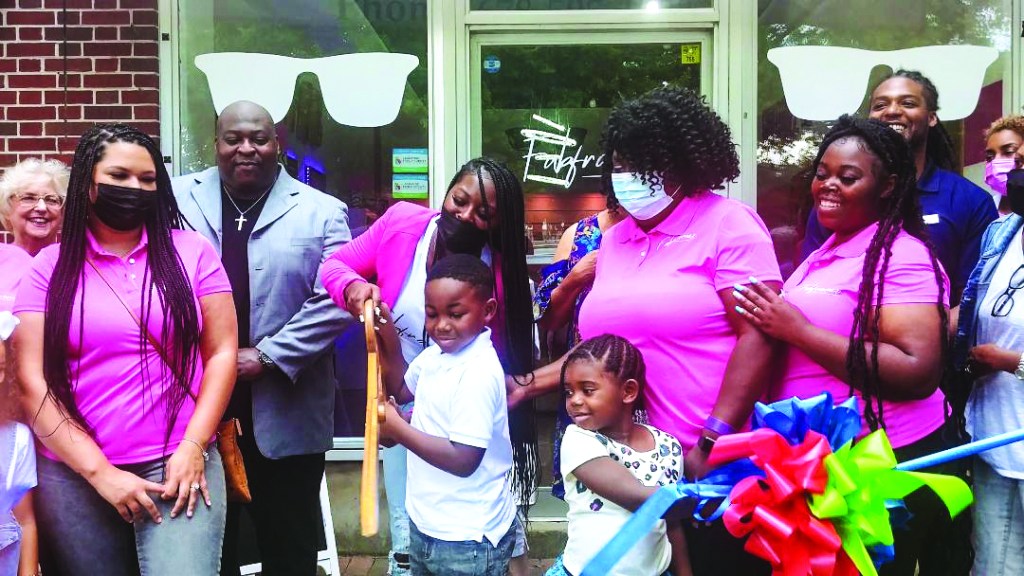 When Tiaria Johnson first opened her business, FabFramez, three years ago, she was serving her customers in a wheelchair, the aftermath of an accident she and her son had been in.

On Tuesday, however, the 25-year-old entrepreneur was fully on her feet and surrounded by family and supportive community members as she celebrated the one-month anniversary of her store’s reopening downtown.

“It’s so vibrant,” Johnson said. “It’s so fun and exciting and I’ve met so many new people. I feel very welcome here.”

Johnson’s business hosts an array of unique sunglasses and a minor selection of clothes. Her store was formerly on West Point Road and hidden away from the customers she was hoping to attract, she recalled.

“I was in a bag and no one could see me,” Johnson said.

Johnson follows in both of her parents’ footsteps as an entrepreneur. Her mother, Taressa Thompson, owns Creative Kingdom Solutions, a marketing business, while her father owns his own auto mechanic business in the area.

Johnson originally wanted to be a nurse but changed her plans after having her son, Chase, who is six-years-old. Wanting to branch out on her own, Johnson began brainstorming what she would sell that would help her stand out.

Just as she opened the first FabFramez, Johnson had been in the car accident that rendered her temporarily wheelchair-bound, her mother recalled.

“She went through a guard rail…” Thompson said.

“[She had] a broken pelvis [and] she was walking on crutches afterward.”

However, it hardly slowed Johnson down. She continued to work hard and recover, Thompson noted, and expand her merchandise. During the beginning of the COVID-19 pandemic, Johnson had to close down her business, only for it to gain new life online. She began shipping all over the country and even places like Canada, she said.

Now, Johnson hopes to expand someday and ultimately wants to be a positive role model for her son and teach him the value of hard work.

“We knew God had a plan for her, and he saved her and my grandson,” Thompson said.

“She was able to recover [from the accident,] and me and her family are just so excited for her and for all the new things on the horizon for her.”