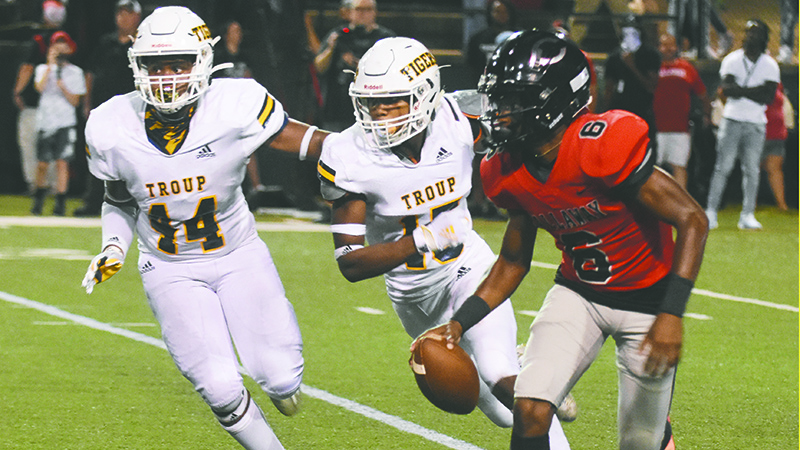 On the second play of Friday’s game, Callaway quarterback DeShun Coleman hit Quenderious Redding on a 65-yard touchdown, giving the Cavaliers a lead they wouldn’t relinquish.

In a rivalry game that at times that felt closer than the final score indicated, the Cavaliers (2-0) topped Troup 28-7 Friday night at Callaway Stadium.

“I think our players answered the bell, they answered the call. We challenged them,” said Callaway head coach Pete Wiggins. “…We had a great week of practice. There were some pretty physical days, and I think it showed tonight.”

Wiggins said the early deep call was just the Cavaliers executing on offense.

“We executed what we worked on in practice. I was really proud of our offense with the execution tonight,” he said. “I thought our offensive lineman did a great job up front. The Troup defensive lineman is fast, and I thought the guys did a really good job.”

Quay Whitfield added a 25-yard touchdown rush in the second quarter, and Coleman threw his second touchdown pass of the night to Exavious Reed in the third quarter to put the Cavaliers up 21-0.

“A lot of weight on his shoulders again, second start of his varsity career… I was really proud of him,” Wiggins said of Coleman’s performance.

Amarion Truitt put it away with an 80-yard touchdown run down the home sidelines to put Callaway up 28-0 with 7:47 left in the fourth quarter.

Although the Cavaliers led throughout, the Tigers had plenty of chances.

An early missed field goal from 33 yards out from kicker Cody Bray left the score at 7-0.

On the next Tigers possession, Karmelo Burton intercepted Tigers quarterback Taeo Todd to set the Cavaliers up at the Callaway 38 yard line. The Cavaliers methodically drove into scoring range — including a pass to Carlos Billingslea where he broke several tackles down near the 30-yard line.

Shortly after, Whitfield ran down the visitor sidelines, past the Troup defense and into the end zone to give Callaway a 14-0 advantage that would last into halftime.

“We had chances, but it was kind of like last year. We couldn’t stick it in,” said Troup coach Tanner Glisson.

Todd was injured, and the Tigers turned to Tyson Duncan to get the offense going. Duncan appeared to throw a fourth down touchdown that went through Dwartney Whortham’s hands into the hands of Andrew Townsend, but the play was called back due to holding.

Following the penalty, Troup needed a miraculous touchdown of over 20 yards on fourth and goal. Due to defensive pressure, Duncan had to throw a short pass and the Cavaliers made the tackle to stop the drive on downs.

“Taeo getting hurt down there hurt us. We had a chance down there around the goal line,” Glisson said. “They have a good football team and hats off to them.”

In the third quarter, Callaway kept a drive going on a Coleman throw to Billingslea down the sideline for a key first down.

Shortly after, Coleman hit Reed — who somehow went over a Troup defender for an unbelievable catch — on a deep touchdown pass to make it 21-0. Pass interference was called on the play, but Reed still made the catch. The Tigers again got inside the 10 in the final seconds of the third quarter. However, the Callaway defense held again — this time on downs — and the Tigers took over.

Following the defensive stop, Truitt’s touchdown put the finishing touches on a big win for the Cavaliers.

Duncan hit Whortham for a touchdown with two minutes left to get the Tigers on the board, but Callaway recovered the onside kick.

All eyes will be on Troup-Callaway Friday night in…