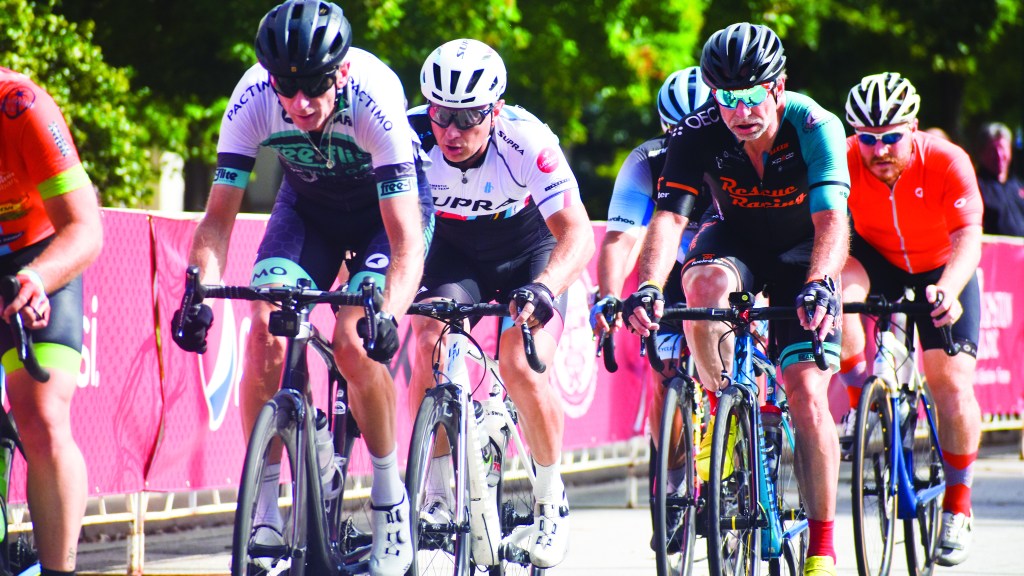 Anyone who’s ever seen a glimpse of a bike race, whether it is a quick clip of the Tour de France on television or a simple picture in a sports magazine, has seen a criterium, though they may not know it.

A criterium is a bike race around a closed circuit, and LaGrange got its first up-close and personal taste of a true criterium Friday afternoon when nearly 100 racers, all of various skill levels, sped through a makeshift loop downtown, for the first-ever LaGrange Cycling Classic. The race was sponsored by the USA Crits Speed Week Series, an eight-race competition with host cities across Georgia and South Carolina.

LaGrange was CRIT’s sixth race in their journey through Georgia. The CRIT races started last week in Spartanburg, South Carolina, and will move on to Athens, Atlanta, Springfield, and Walterboro.

On Saturday, the races will travel to Hapeville and College Park to finish off the event.

Riders, some from all over the country, would face not only the unfamiliar loops but also wet asphalt from a brief rain shower that took place an hour before the first race began.

Four members of Team Medellín, a team from Columbia, visited Golden Bikes in downtown LaGrange Thursday night and shared their experience as racers with visitors.

Team Medellín is currently the number one team in North and South America and is sponsored by the city of Medellín, Columbia, Fischer said.

“It’s for the amateurs and the pros, and they can choose to ride one race or the series,” said Thad Fischer, the Speed Week Series director who translated for the team.

“The series has a point system for the pros. There’s also a team category. On Sunday in Atlanta, we give out a $130,000 prize money to the winner.”

“Part of what they’re doing is that they are branding the city name, so they are, in sense, ambassadors for the sport for the city of Medellín,” Fischer said. “That’s a big deal for them.”

Chris McChargue, of West Point, works by day as a Human Resource Professional for KIA Georgia. Currently, Chris is training for North Georgia’s Six Gap Century and 100-mile cycling event held in the North Georgia Mountains and the Pinhoti 100-mile trail running event that he estimates will take 26 hours to complete. Three short years ago Chris tipped the scales at over 300 lbs. In 2018, he embarked on a life-changing journey of fitness that has taken him 3,200 miles on foot, 10,800 miles by bike, and 37,000 yards swimming to lose over 100 lbs.

Since starting to cycle in Oct. 2019, Chris has completed two double centuries, twelve centuries and is most proud of his recent century in under 5 hours.

“In 2019, I discovered cycling for the first time in my adult life,” he said. ”I like running, but I love being on my bike, and pushing myself to whatever my limit is for that day. Cycling has definitely helped me to establish a way to both maintain my fitness and enjoy the world around me.”

Michael Loutzenheiser has lived in LaGrange all his life and is a mechanical engineering student at the University of Alabama in Huntsville.

Throughout high school and college, Michael has fallen in love with the LaGrange cycling community through his work as a mechanic at Golden’s Bike Shop.

In high school, Michael was a three-time USA Triathlon All-American and the 2017 Xterra USA Champion for his age group.

The vast majority of his racing experience lies in the cross-country mountain bike racing scene including some highly competitive races such as the 2019 Mountain Bike National Championships. He said he is looking forward to adapting his skills to achieve his goals in the criterium, a rapidly expanding category of road bike racing.

As he was preparing for the race, Arnold said he was ready for it.

The race was notably smaller than it usually would be, Fischer said. This was due the COVID pandemic, which canceled rides in the spring and rescheduled.

“Everything got compacted into the fall [race],” he said.

“Plus, there’s another big race in Arkansas, so that’s taking away from us. Roughly, we’d have over 70 men and 30 women.”