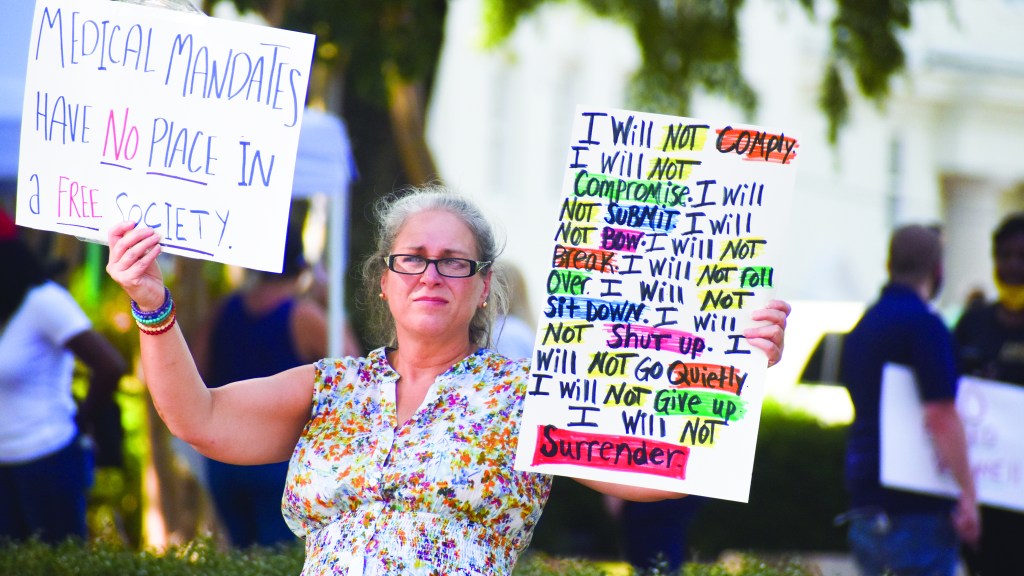 Laura Kennedy holds up two signs that call for an end to medical mandates for workers. Kennedy organized the Medical Freedom Rally Thursday where attendees called for bodily autonomy when it comes to receiving vaccines.

Armed with signs supporting bodily autonomy, over 20 people lined the streets of Lafayette Square on Thursday protesting vaccine requirements for workers who may be at risk of losing their jobs unless vaccinated.

“We’re standing with our [workers] here who are being mandated to get a medical procedure they may not want,” said Laura Kennedy, the organizer of the protest and owner of the Herb Shoppe on Ridley Ave. “The government is not in the mandated business. We’re a free society.”

Protests referred to the vaccine requirement for some companies and hospital staff around the state as the catalyst of their ire.

Wellstar Health Systems announced earlier this month that, starting Oct. 1, all team members will need to be fully vaccinated. The healthcare system joins others such as another Georgia system, Piedmont Healthcare, in requiring the vaccine.

“Right now, it’s the vaccine, but it could be anything two, three years from now,” Kennedy said.

Protesters carried signs that contained mantras such as “Unmasked, Unafraid” or “Coercion is not Consent.” They held the signs up along the square’s fencing during late afternoon traffic, receiving honks of support among the cluster of traffic.

Valerie Rossco held a sign that said “Please do not force me to go against my belief system. I do not expect you to go against yours.”

Rossco said she personally was not against others getting a vaccine or wearing masks, but she herself did not wish to receive the vaccine.

“I want everybody to do whatever,” she said.

“Everybody should have their own beliefs and live by them. No one should be forced on someone else.”

Among some of the protesters were current and ex-health care industry staff.

Rick Couch, retired from his position at a nursing home in Union City, just before vaccines were made mandated, he said.

“We’d already been tested twice a week for a year,” Couch said.

“I got out before I had to make the choice of getting the vaccine or leaving the job. I wasn’t going to get the vaccine, so it worked out in my favor.”

Couch finds the vaccine mandate “cut and dry” and leaves workers with no other options. He said anyone who has had COVID is has additional immunization against catching the virus again.

Denise Stewart and Cassandra Wilson are both workers at Vernon Woods Senior Living. Both said that while at their job they wear masks and sanitize regularly but are refusing to get the vaccine.

“We’ve done everything they’ve asked of us except this,” Wilson said.

“I don’t feel like it’s the right thing. If we really are horribly dangerous, why haven’t we been terminated already?”

Wilson says her reasoning is due to having a bad reaction to the vaccine when she took the first dose.

“I felt slower mentally… even now with my speech it takes me a while to process things,” she said.

“My arm and on the side of my face and my nose was cold.”

Stewart says she’s worked in her position for 17 years.

“I’m the same person I’ve always been … I’ve worked hours when nobody else would work hours. I’m good to fill in, but I’m not good to keep.”