Woman loses parents within days of each other to COVID, encourages vaccination 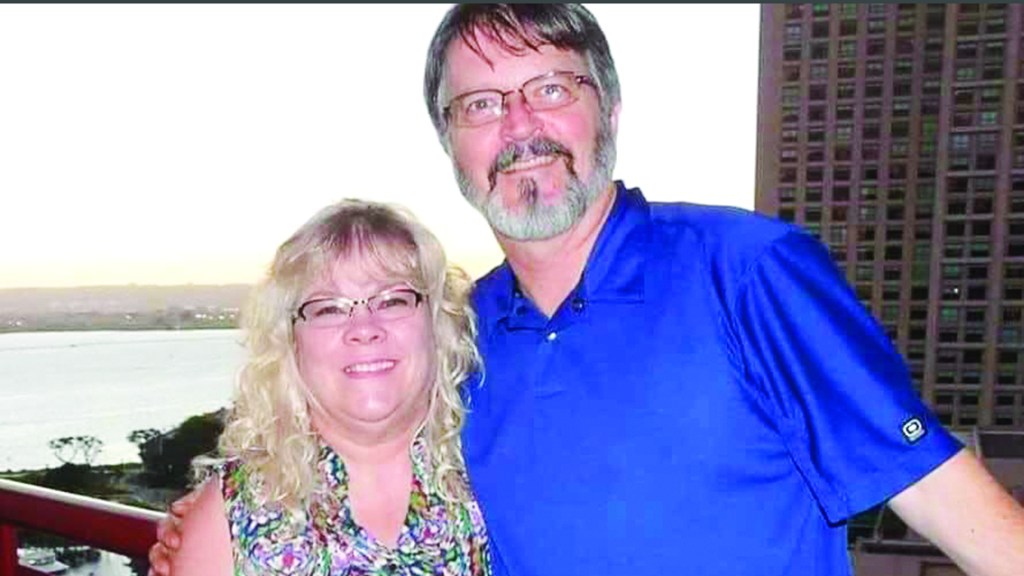 Carla and Brandon Smith died within three days of each other from COVID pneumonia. Their daughter and only child is sharing their story in hopes of encouraging others to get vaccinated.

Elana Brown, a Newnan resident, has faced a crippling tragedy this past week.

Both of her parents, Carla Cook Smith and Brandon “Clint” Smith of Hogansville, passed away from COVID-19 pneumonia within three days of each other — Carla on Saturday, Aug. 21 and Brandon on Monday, Aug. 23.

Both 62, neither of the Smiths were vaccinated against the virus. During the course of the pandemic, Brown and her parents faced opposing views on the legitimacy of the virus itself. Those views extended to the announcement of the vaccine, which the Smiths had an instant distrust of.

“As beautiful as they were, we did not agree on the vaccine at all,” said Brown, who herself is vaccinated.

“They believed that the vaccine had microchips in it and that the government was tracking you. They thought that the mark of the beast was in it, that it was part of Revelations. They had the belief that ‘God has got me, and he’s not going to allow me to get sick from this.’”

Despite this conflict, Brown remained relatively close with her parents, she said, and still loved and admired them greatly.

She described her father as someone wwho enjoyed Harley Davison, wearing leather jackets, hunting and rock music. Brandon worked at Kia in LaGrange as a mechanic.

“They absolutely loved him,” Brown said.

“I just got his stuff from his locker [Thursday,] and his coworkers cried with me. They said there is a big picture hanging in the cafeteria that has my dad in it. They gave me a framed photo of him from that big photo.”

Carla was an artist and author who wrote several books on local history. Some of the places she wrote about included Senoia, Hogansville and Coweta County, Brown said.

“They were so ‘go for your dreams’ people,” she said. “I have a degree in Opera…they inspired me to get it. They loved to hear me sing.”

Both the Smiths were devout Christians as well, Brown noted, and loved socializing.

The Smiths spent their final moments apart, Brown noted. Her mother, the first to become sick on Aug. 2, admitted herself to Piedmont Newnan Hospital. Brown described her as “out of it” due to her illness in her final days.

“My grandmother and I were on a FaceTime video with my mom, and [she] was blue,” Brown said. “Her lips were blue, and her skin was gray. She didn’t look like herself at all. [My grandmother] and I just wailed.”

Three days after Carla was hospitalized, Brandon called 911. The first responders had to break into his home to get to him because he could not breathe, Brown said.

He was subsequently checked into Wellstar West Georgia Medical Center.

In his final moments, Brandon faced depression over his wife’s illness. Brown would bring him care packages with a highly requested pack of zero-sugar blue Gatorades.

However, Brown was certain at that point that her father wasn’t coming home.

“Once they’re on the [ventilators], they’re sedated, they’re on paralytics,” she said. “There’s no communication anymore.”

The Smiths’ memorial service will take place on Aug. 28 at the Grace Covenant Worship Center in Hogansville.  Brown plans to have her parents cremated and scatter their ashes along the beach on Jekyll Island along with the flowers from the memorial service. She plans to sing Etta James’s “At Last,” the song she sang at their wedding when she was 13-years-old.

As she continues to grieve for her parents with her husband, Justin, by her side, she urges others to consider getting vaccinated.

“I want people to care enough about their loved ones to go get vaccinated,” Brown said.

“This isn’t even about [them] anymore. It’s about their family, their children. If you don’t love yourself enough, love them enough. Do not allow your families to go through what I’m going through. Don’t orphan your children.”