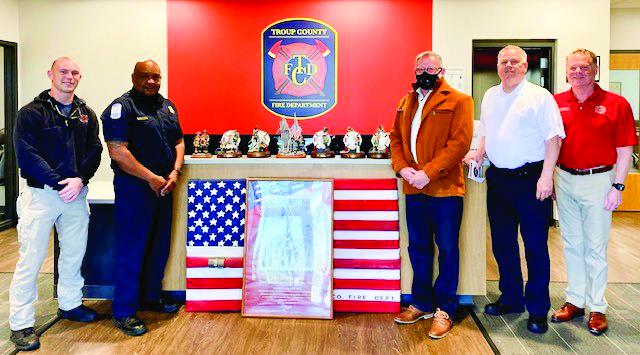 Troup County extended a heartfelt ‘thank you’ to Jimmy Allen Sanders and his family for the collection of memorabilia that was donated to the Troup County Fire Department in honor of the late Charles “Charlie” Sanders.

Sanders served as a firefighter in Atlanta for over 20 years, and upon his death, Sanders’ wife, Connie, along with her two sons, Jimmy and Bobby, decided to honor Sanders’ memory by donating his collection of firefighter memorabilia to the Troup County Fire Department.

Jimmy recounted the effect his father’s service had on the city and its surrounding neighborhoods.

“After my father’s passing, I was shocked to see how many firefighters came through to pay their respects,” he said in a press release from Troup County. “He truly had a huge impact on the Atlanta area.”

Throughout his many years of service, Charlie Sanders collected several pieces of memorabilia, including posters that were printed following the events of Sept. 11, 2001, statues depicting firefighters in various scenes, postal records and more.

“We wanted to give back to those who are still doing what Daddy used to do,” Jimmy said. “He just wanted to save people.”

The collection of memorabilia is now being kept at the Troup County Fire Department, where it will be preserved in order to maintain the memory of Sanders and his contribution to the many communities he served, per the press release.