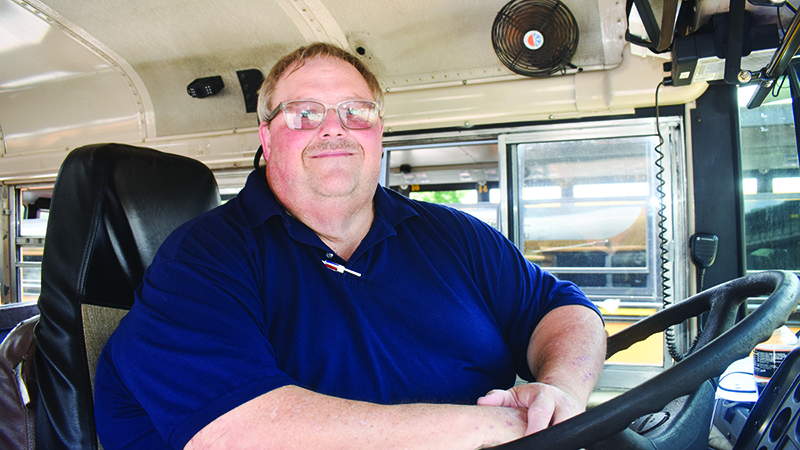 Ana Lambert had major qualms against putting her young son on a school bus during his first year of school. Her experience as a child with bus drivers had not been the best, and she did not wish to expose her young son or daughter to such people at their age.

However, the generosity and kindness of her six-year-old son’s bus driver, Will Vowell, helped ease her concerns and helped make him a popular character among not only her children but a good many of the children that he drives to and from school.

Now, when bus 08-02 pulls into a stop, or any bus Vowell may be driving, students are all smiles as they await a fun, comfortable ride.

“Some of my kids have been with me through [their whole school experience],” Vowell said. “It’s awesome to see them grow up. They come on [in] pre-K….and  some of them are afraid to get on the bus… by the time they’re  fifth graders, they’re ready to go.”

Vowell has worked for the Troup County School System for nearly five and a half years, he said. Currently, his routes consist of driving children attending Franklin Forest Elementary School and LaGrange High.

He had previous experience taking care of his mother and has engaged in various organizations in the community, including the Boys and Girls Club and the Georgia Sheriffs’ Youth Homes.

He is also a bus driver for his church.

His previous work experience with children gave him a steady perspective on how to create not only a safe environment for his riders but a fun one as well.

“Right now, I think I have the best kids in Troup County that ride my bus,” Vowell said.

“Plus, I think I have the best parents… they’re involved, and parent involvement is the most important thing. I haven’t had to do a write-up in about two years.”

When Vowell pulls his bus to a stop each morning, he greets his passengers with a bright smile and a hello, and usually has music, something fun and upbeat like the Beach Boys, playing over the intercoms. By his side is his trusted bus monitor, Courtney McFarland, who took over for his previous monitor, Bonnie Bond, who was also popular with the kids, Vowell said.

To keep his youngest riders calm and focused, he entertains them with bus trivia or fun riddles. Some days, his riders will exit Vowell’s bus with a treat or a small toy for good behavior, and he always makes sure there are a few extras.

“This has been the year of the siblings,” Vowell said.

“So I always make sure to have a few extras for their brothers or sisters when they’re waiting with their parents at the bus stop.”

During the holidays or the summer, the inside of the bus will be decked out in tinsel or streamers or even lights. Last year he managed to install a small Christmas tree in the back of the bus.

Lambert’s son, Ethan, served as a helper when he first started riding the bus as a kindergartener. They joined Vowell’s route after moving, and Ethan blossomed, Lambert said. Now, her daughter, four-year-old Sophi, has joined the route and loves it just as much as her brother.

Lambert sent an email to the school system earlier this month praising Vowell’s work and sharing the impact his kindness has had on her children’s riding experience.

She noted that on top of his general kindness, he makes birthday bags the children. One one occasion, her son’s toy school bus was messed up and Vowell took it home to fix it for him, Lambert recalled.

“[The bus] is where the kids start their day,” Lambert said. “My kids hate missing school because they don’t want to miss him. He just gives them that boost that starts their day.”

The weekends and holidays act as a sad occasion for Lambert’s children, and Vowell as well. Vowell said during the longer breaks, he’ll begin thinking about “his” kids and their well-being, and is more than thrilled when he runs into some of them in town.

“I kind of recharge when I deal with the kids,” he said.

“The days the kids ever get on my nerves or I get upset with one of them, that will probably be my last day driving.”